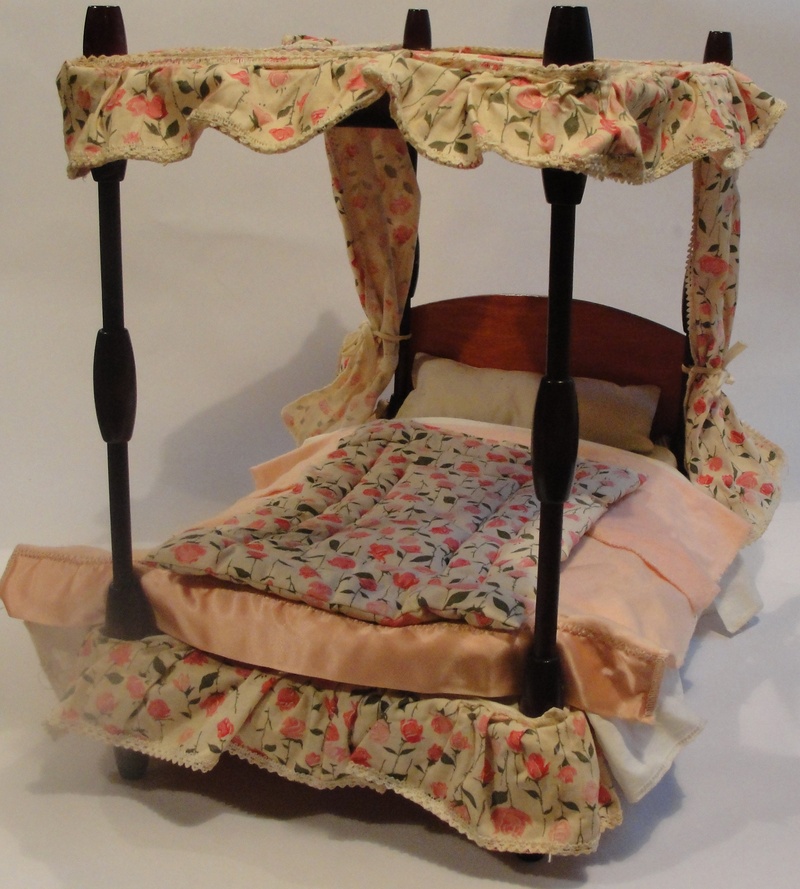 Most Sindy collectors can easily recognise the iconic 1960s 'Cherub Bed' (see 1966 Scenesetters) however what is often forgotten is that Sindy had an earlier bed made for her not by Pedigree but by Good-Wood Playthings Ltd. Pedigree was a Lines Bros. Ltd subsidiary and when Walter Lines retired as Lines Bros Chairman in 1962 at the age of 80 years, he established Good-Wood Playthings Ltd. It was not a retirement hobby but a business, and he set up a new factory in Lavant, West Sussex, which produced traditional wooden toys. Even in the 1960s Good-Wood Toys was an anachronism, producing quality wooden toys in an age where plastic toys were becoming the norm. But Mr. Lines had been in the toy business for over 60 years and he knew a thing or two about toys, so he personally oversaw the design of new ideas and products that Good-Wood turned into robust wooden toys made to last. So it was Good-Wood Playthings Ltd who produced the beautiful made and extraordinarily rare Sindy four poster bed.

This page is devoted to a beautiful boxed example. Although the box clearly distinguishes itself as a Sindy product, there is nothing on the bed itself to prove it belongs to Sindy. 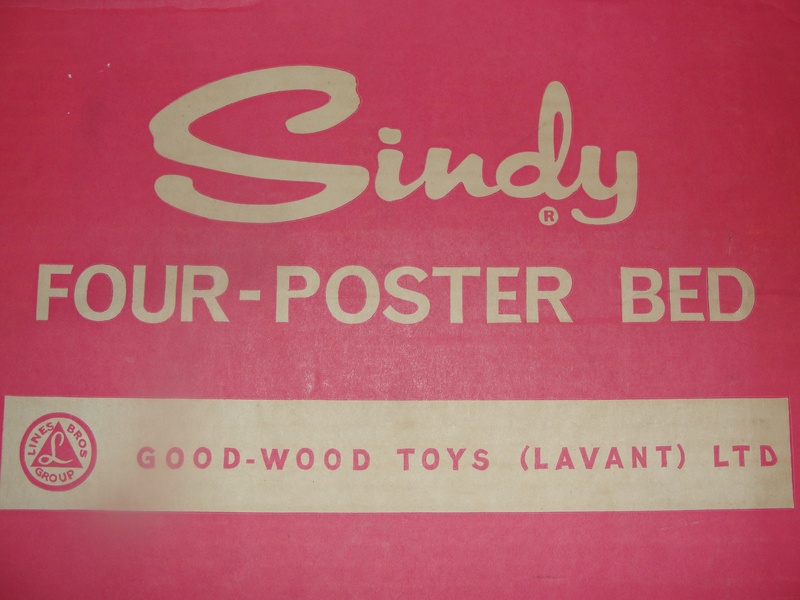 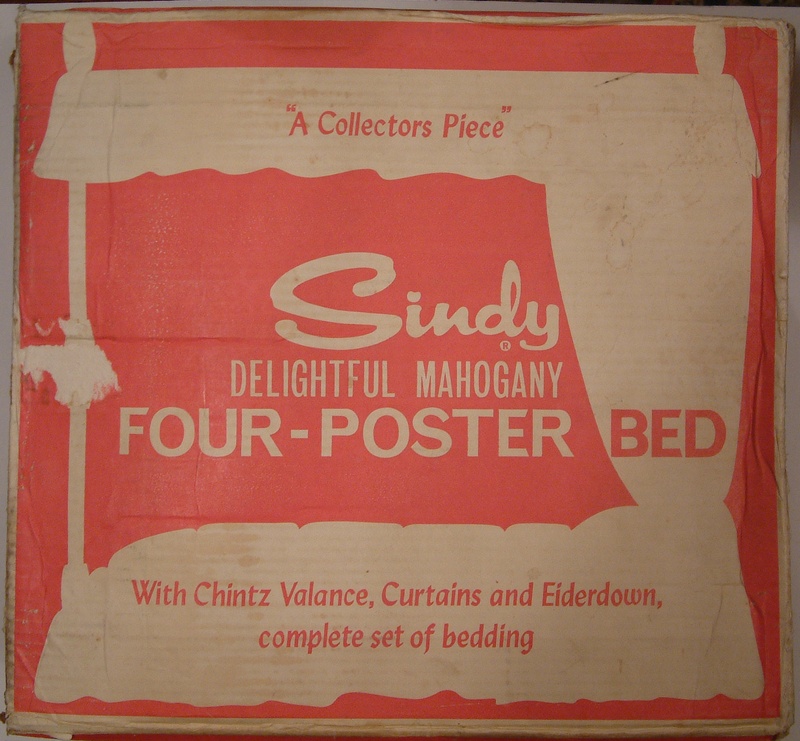 On the back of the bed head there is a small silver rectangular adhesive label with a red border which measured 1½ inches long by 5/8ths of an inch high which said:

“GOOD-WOOD TOYS (LAVANT) LTD.
NEAR CHICHESTER
MADE IN GREAT BRITAIN
NO SHARP EDGE”

The bed came fully-assembled in a large box (17 x 16 x 10 inches) complete with bedding. The bed was 16 inches long and was made of turned and shaped polished wood. The four posts were made from a deep-stained mahogany wood, whilst the frame and bed head were made from a much lighter (and redder) stained wood. 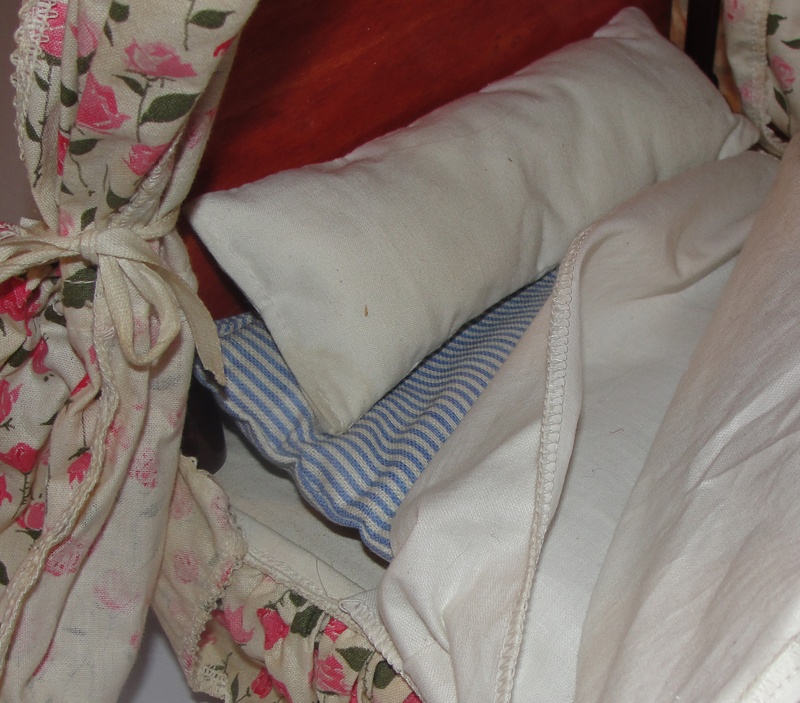 The eiderdown (as it was called in the description), but which we would probably more readily recognise as a counterpane, was stitched in three rectangles to give it a sort-of quilted look, and together with the curtains and valance were made of cotton chintz with a lace trim.

To keep Sindy warm there was a pink Witney brushed cotton blanket, with an overlocked stitched pink satin border to one short edge. It had two white cotton sheets and a white cotton long bolster-shaped  pillow. Some examples also appear to have included a smaller squarer-shaped pillow (not shown).

It had a blue and white ticking cotton mattress cover (very similar to the material used for Paul's 'And So To Bed' pyjamas and Sindy's 'Emergency Ward' nurse's dress). It was sealed on all sides and it felt quite thin. The stuffing felt more like material than the sponge covered vinyl of the 'Cherub Bed'.

We know this bed was displayed in the Hamleys' catalogue from 1965 to 1972. Beyond those dates we do not have any documentary evidence to confirm its availability, but it is not shown in the Hamleys' 1973/74 catalogue, so we assume that production of this lovely bed had ceased by then. There is also a view that this bed was originally made for any 12 inch teenage doll and was subsequently rebranded as a Sindy bed, but we cannot confirm that. If you have any more information on this aspect, please do let us know. Below is a photo of the 1969/1970 Hamley's listing. 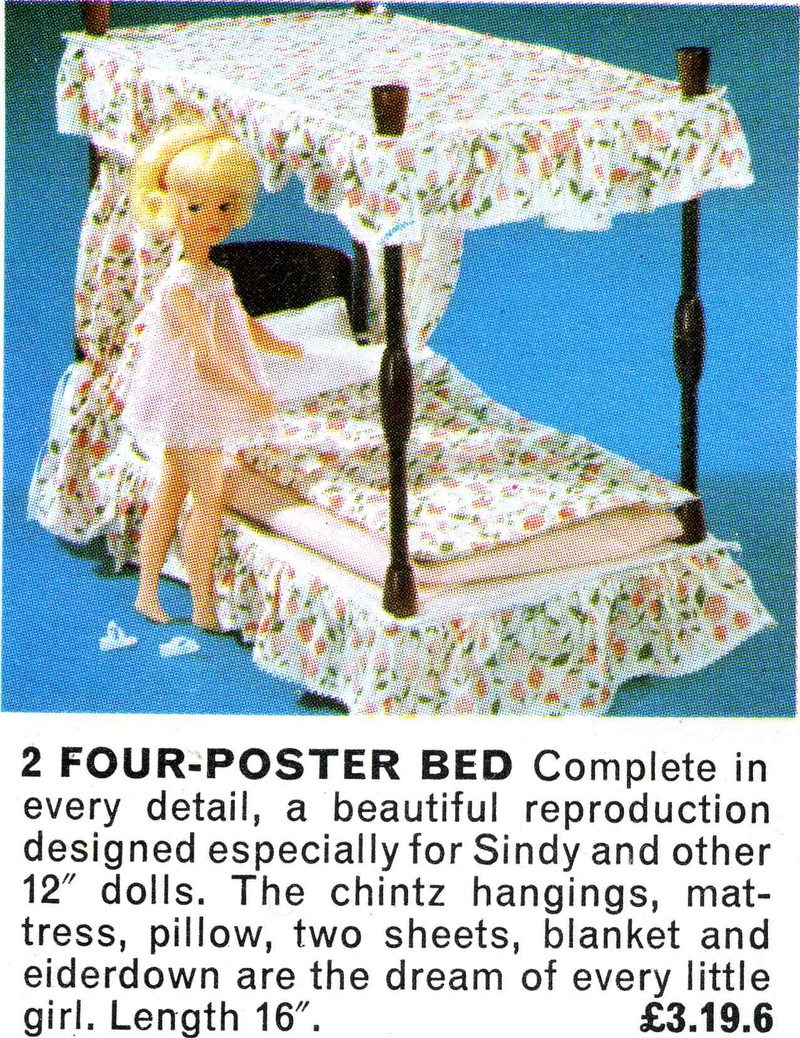 Given that this bed was available for so long, one wonders why more of these beds are not seen today. We think there are perhaps four reasons for this:
1. A lot of collectors are not even aware of its existence and so they don't look out for it.
2. Without the packaging, there is nothing to identify this bed as belonging to Sindy, and so this knowledge has been lost over time. Even if you were given one of these beds in the 60s and were told it was for Sindy, how could you prove it today from the bed alone?
3. These beds were quite exclusive. To put it into context, in 1966/67 the Good-Wood Four-Poster Bed cost £3.9.4, but you could buy Sindy's plastic 'Cherub Bed' for £1.12.11 which was just over a third of four-poster bed price. The average weekly man's wage in 1966 was £23.9.5, so the Good-Wood four-poster was a relatively pricey purchase for the average family and probably sales of cheaper teenage doll beds far outstripped the sales for this lovely four-poster. This would mean that today there are not that many around anyway.
4. Given the choice, which bed would a little girl choose for her Sindy? The beautifully made but maybe old-fashioned looking four-poster, or the modern white and gold “glitzy” 'Cherub Bed' with matching bedroom furniture, which if you were lucky, your parents might also eventually buy for you? We regret to say we'd have probably chosen the 'Cherub Bed'. This aspect might also have affected the number of these beds that were purchased.

Good-Wood Toys Ltd also made the Sindy Puppets and the Sindy Jack in the Box which also have their own pages on this website.