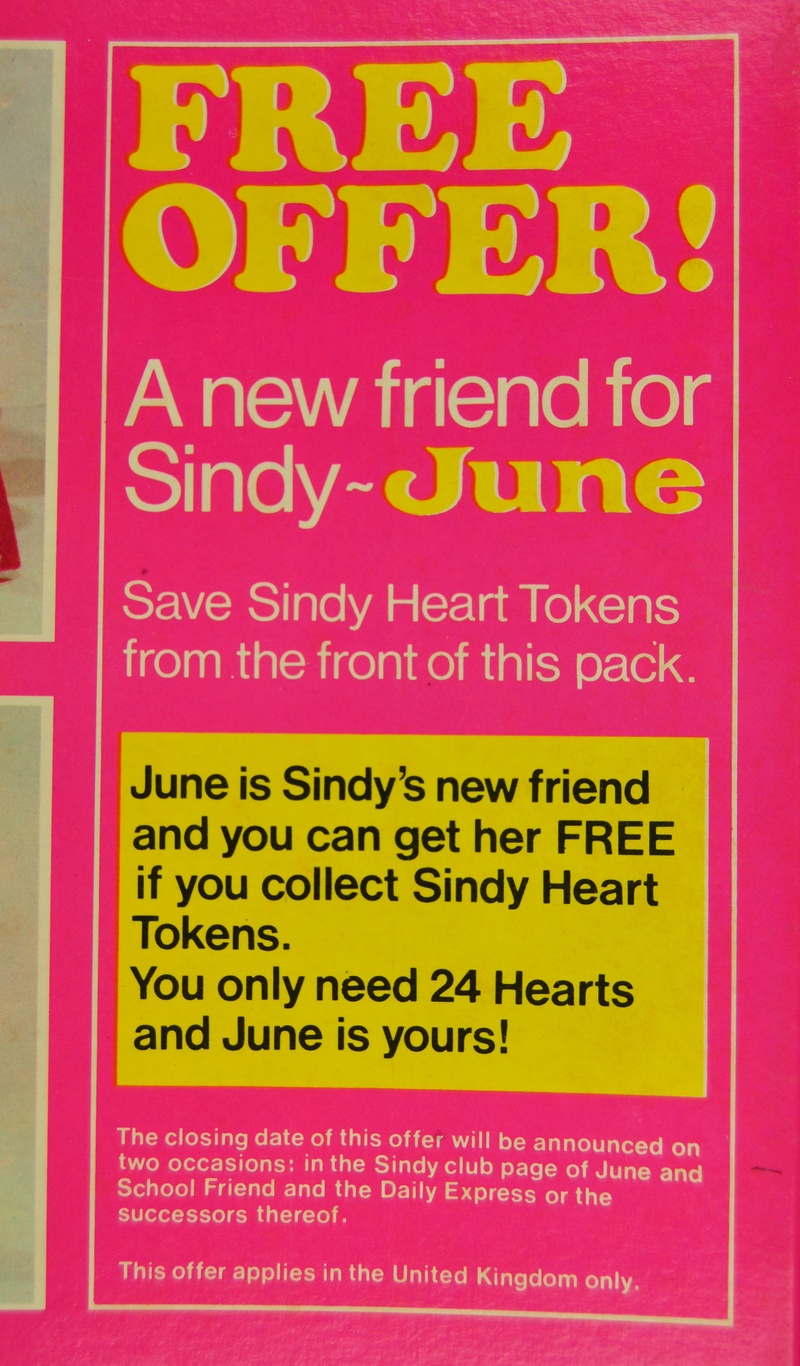 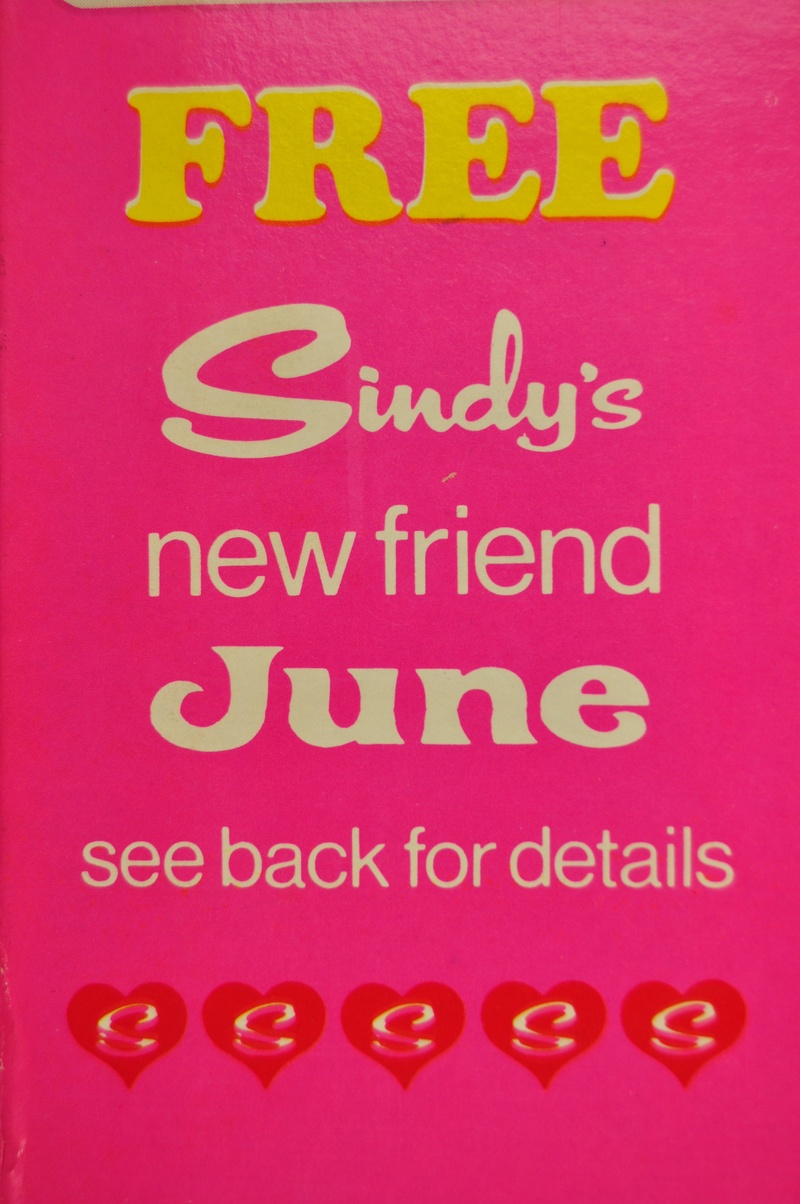 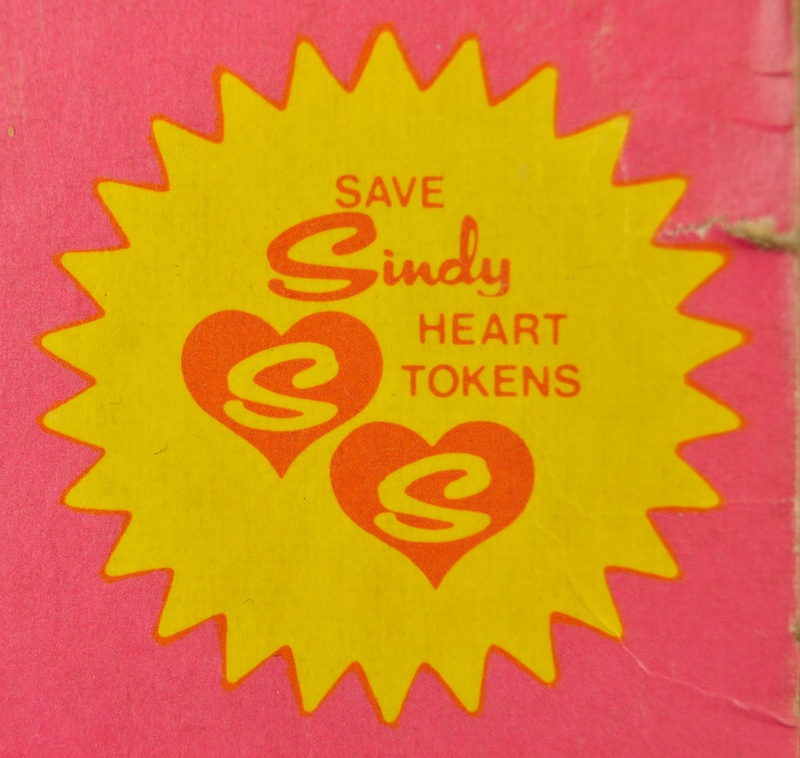 In 1972, just as Sindy's 1960s friends had been phased out, Pedigree introduced a new companion, announcing the promotion in the 1972 trade catalogue and also in the 1972 Sindy style booklet. The promotion also featured on some of the early boxed fashions (see first photo above).

Sindy's new friend was called June and was probably named after the 1960s/70s girl's comic that had become very much associated with Sindy. You couldn't buy her in the shops, you saved up the heart tokens which could now be found on Sindy fashions (see second photo above) and scenesetter packaging (see third photo above) and you stuck them to the collectors card provided. The 'free' June offer applied in the UK only. When you had collected enough hearts (24 of them for the first June) you sent the completed card together with a 10p postal order to cover postage and packing to “Sindy Hearts, Church Hill, Ramsgate Kent'. Your June would arrive a few weeks later dressed only in a pair of white pants ready for you to dress.

In terms of marketing, this was a very clever ploy, not only did you have to collect the Sindy hearts (and we know that loads of children did as is evidenced by the number of boxes still found today with cut out holes where the hearts would have been), you then had another doll that you had to dress.

There were three versions of June. 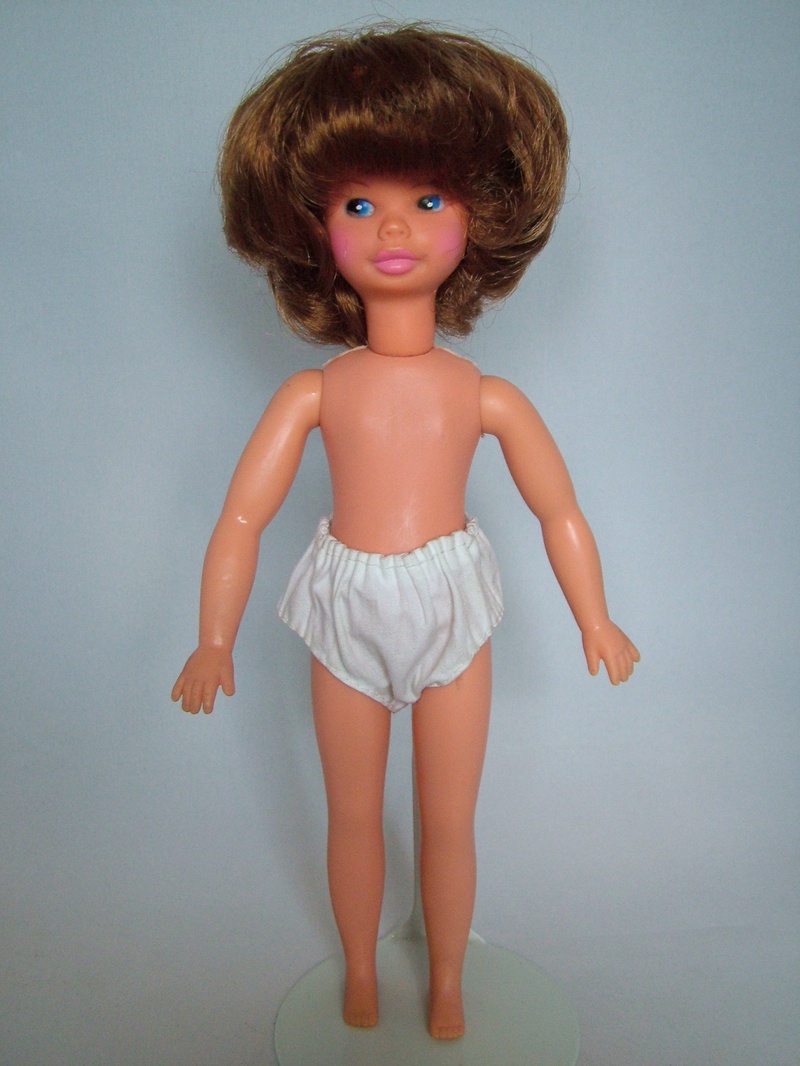 The first June was a strange little creature. She was the same size as Patch, with a Patch body with a new head. Her markings were 055001 on the back of her neck and 047001 on her body (the same as a Canterbury Patch body). She had thick mid-brown curly hair, big pink lips, and (it has to be said) a face that possibly only a mother could love.

?She will come to you ready to be dressed with any of Patch's wonderful outfits
which are shown in the new Sindy catalogue?. 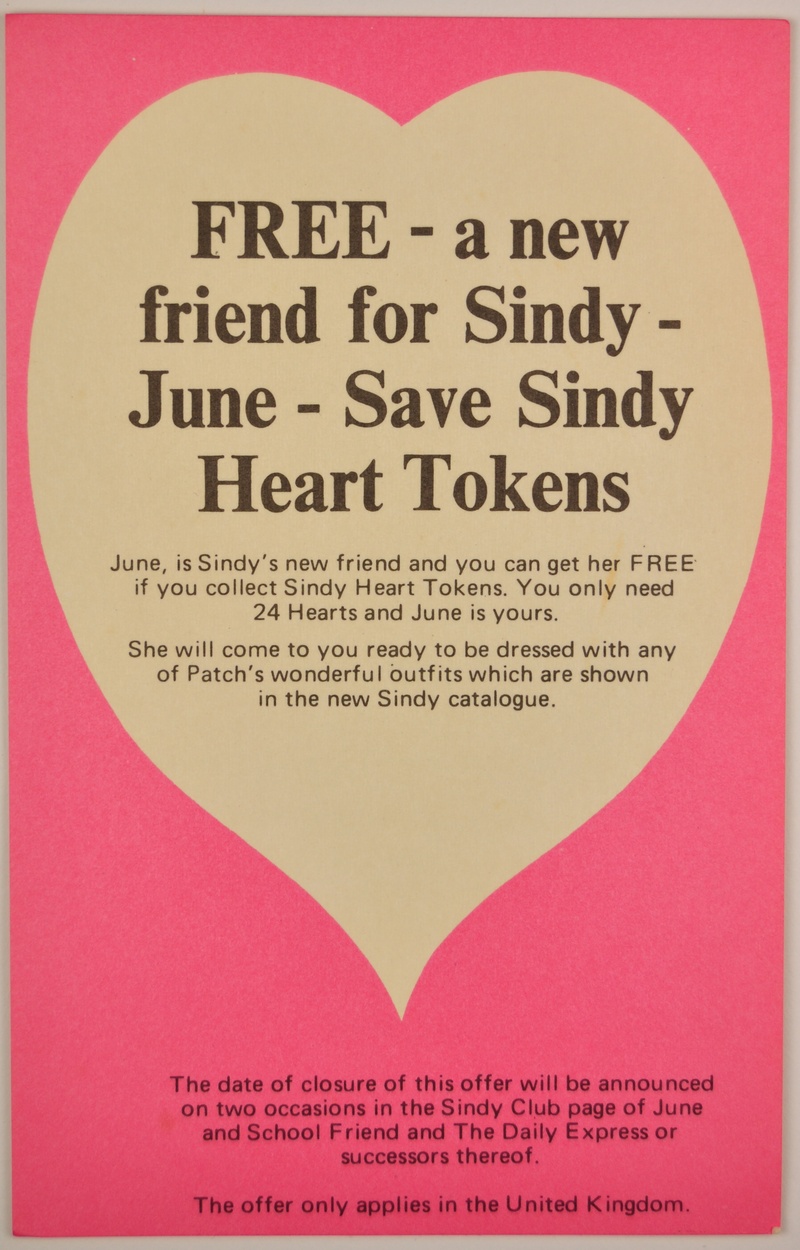 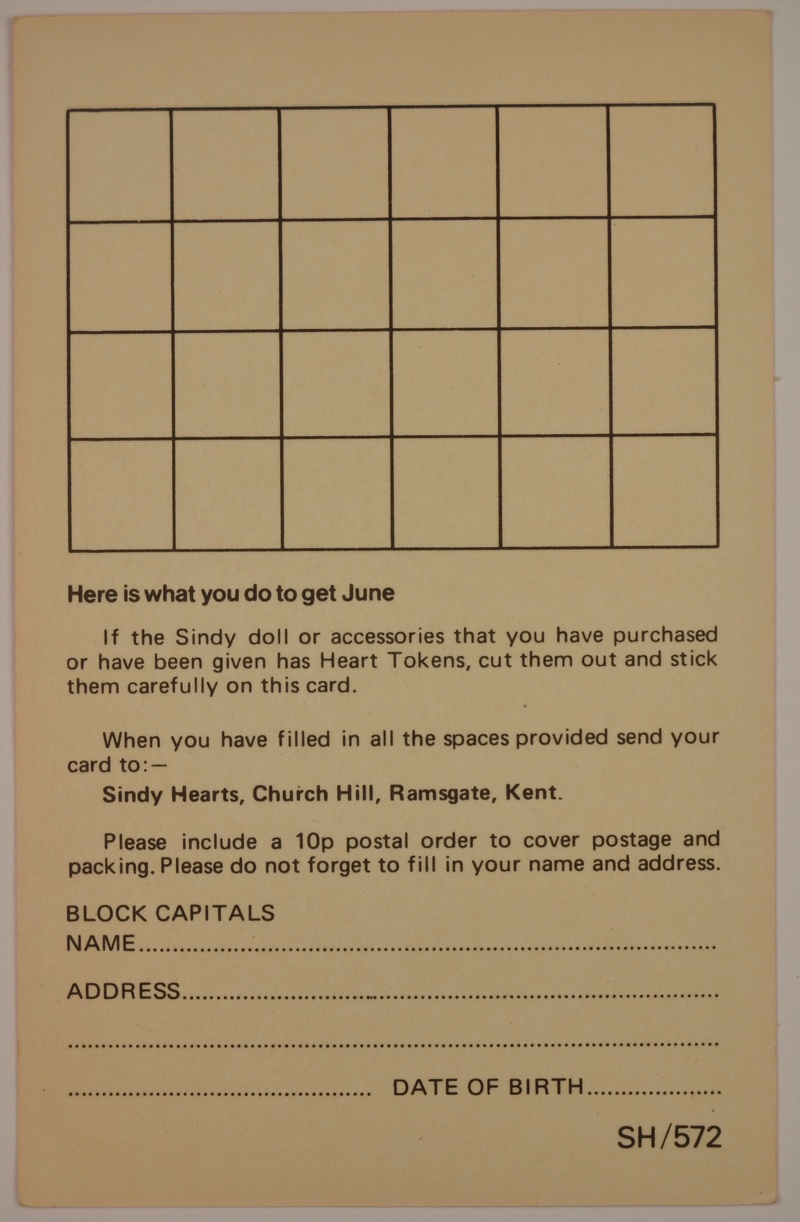 In all likelihood, she was introduced as another way of using up Patch's excess outfit stock. This version of June was not available for very long. Patch was dropped at the end of 1972, and this doll was quickly replaced so she is now quite rare today.

With the end of Patch and perhaps with the deal with Debenhams to sell off what was left, the June doll was quickly updated to support the selling of mainstream Sindy outfits. The new June was much more conventional looking. She had a Trendy body with 033029 on her back and 033030 on her bottom and she had a new head marked 055014. This model had bright red lipstick and slightly strange eyes without the little white painted dots giving her eyes a slightly blank appearance.

She can be found with two hairstyles, the hairstyle on the June in the first photo above left is the most common. Her hair is cut in a "feather cut" which was very fashionable at this time and was worn by celebrities such as Jane Fonda and Liza Minnelli. The June in the photo on the right has a thick head of hair which is styled in a layered pageboy with a sideparting. 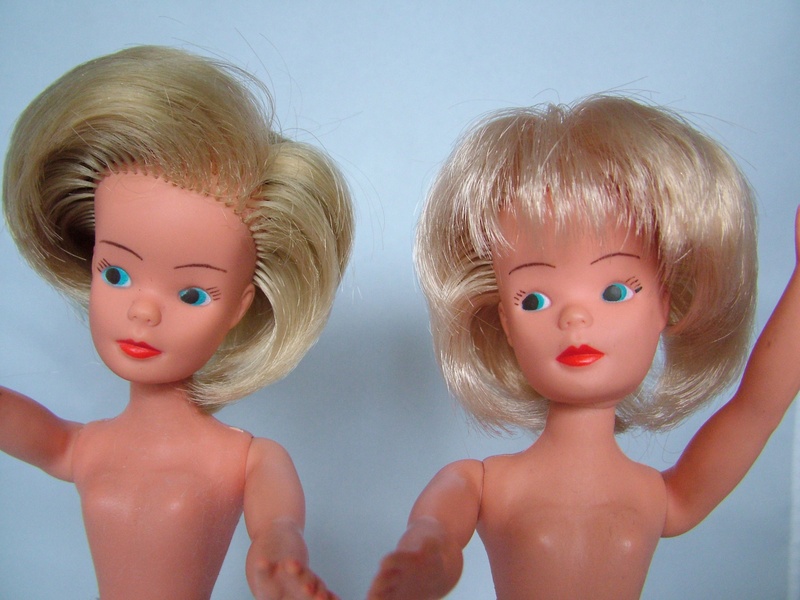 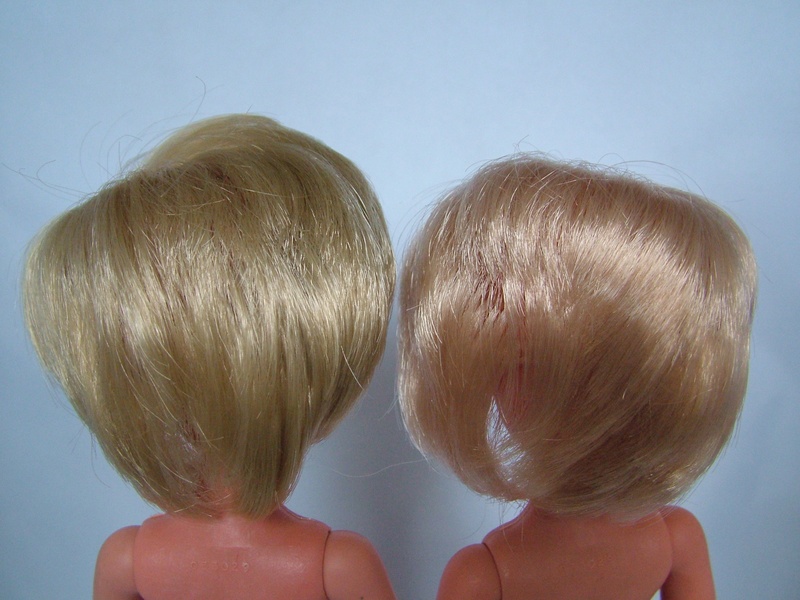 The 'sidepart' June has honey blonde hair and the 'feather cut' June has champagne coloured hair.

As the original collector's card had described a doll who could wear Patch's clothes, it had to be revised. The new card made no reference to the size of the doll and cleverly 'gave' the budding collector two hearts to start the collection - clever Pedigree - who could resist such an offer. Interestingly, although the card was revised it still bore the original publication reference of SH/572 so you do have to check the writing and the hearts to tell the two cards apart. 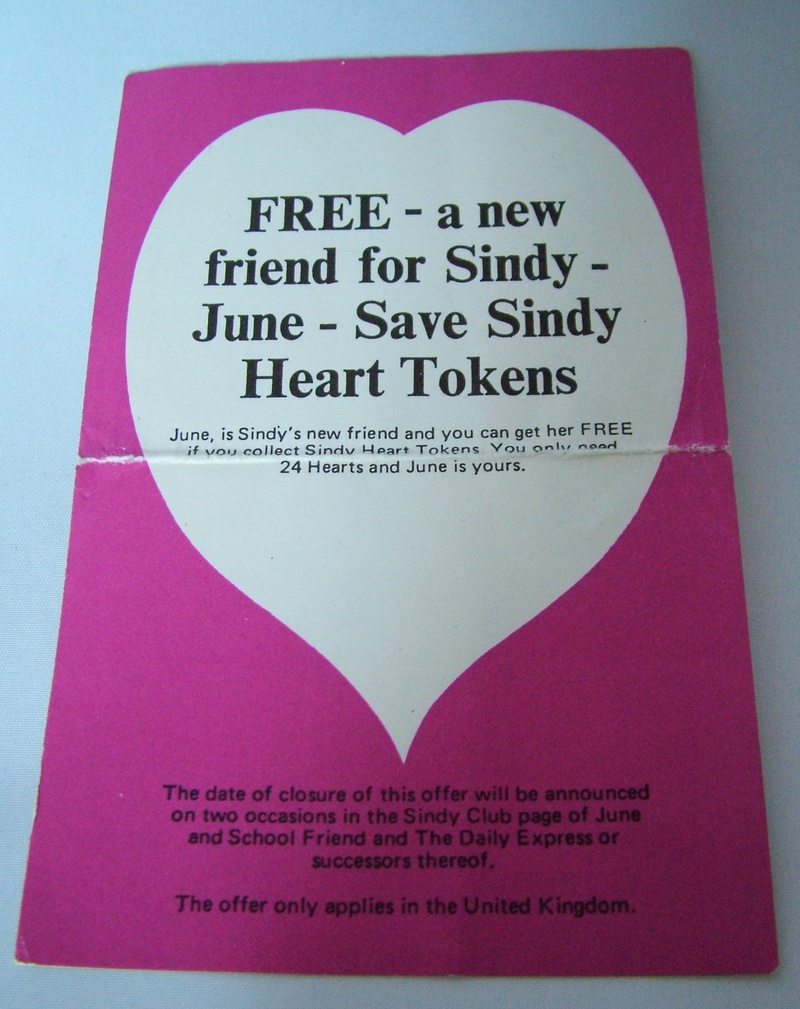 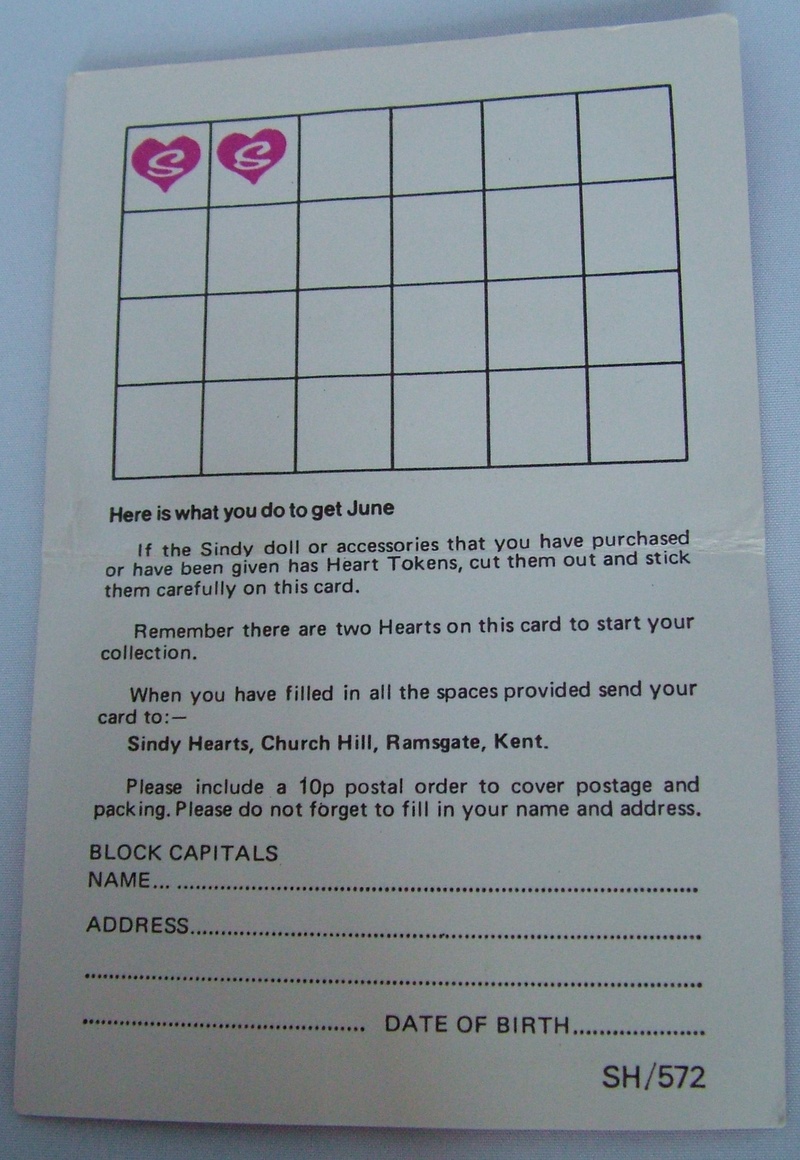 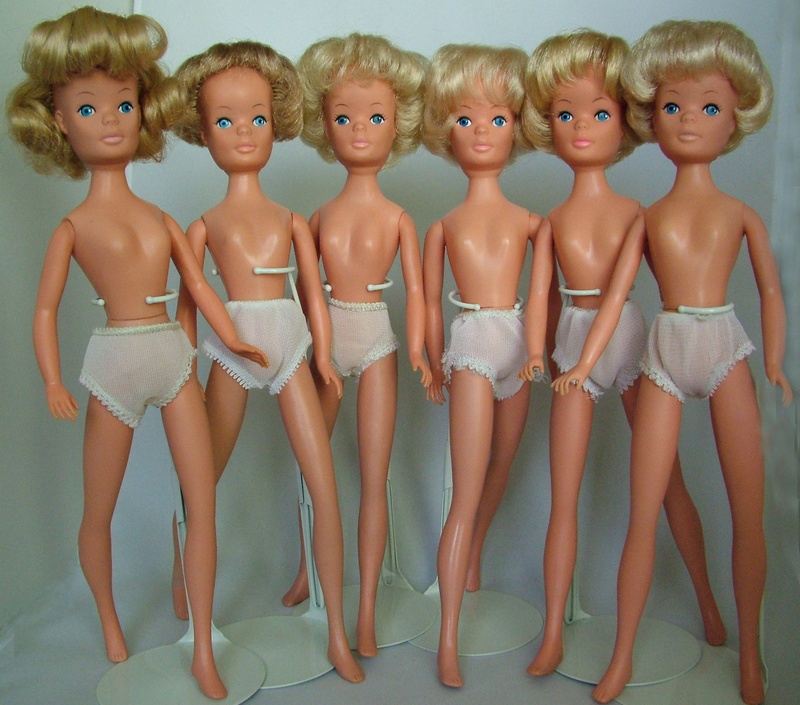 Although we have described her as a 1975 release, some references refer to this June as being from 1974, and indeed she might have been available slightly earlier as the Trendy body stock was exhausted. So, with the demise of the Trendys, June needed a new body. She was again remodelled with a new head and was given the basic skinny leg Funtime body with the hard arms and legs. Her markings were 055014 on the back of her head, MADE IN HONG KONG 033126X on her lower back and 033127X below her waist above her bottom. We are aware that this June has been found on other bodies with different body markings, but whether this is simply as a result of head swapping or whether she in fact became a 'spare parts' doll towards the end of her existence we can't say, but we understand that she has been found with a Trendy body and also a 1976 Funtime body.

As you can see above, this June has been found with varying hair colours and different face paint. Her haircut has been described as being based on the “Purdey” haircut (from the ITV show “The New Avengers”) but this series was first aired in 1976 so perhaps it was a bit too late to have influenced this style, but bobbed styles were back in fashion at this time. As you can see June's bob had varying lengths, layering and different partings. We also think there are two quite distinct head shapes, one with a square-shaped jaw and the other more oval. You can see this most clearly on the Junes in the middle of the close-up photo above. The square-shaped head almost seems slightly too small for the neck knob.

This June was more 'expensive' than her predecessors and you now needed to collect 30 hearts for her, plus postage which had gone up to 20p. Again, this collecting card gave the budding June collector a 'head start' with two printed hearts. 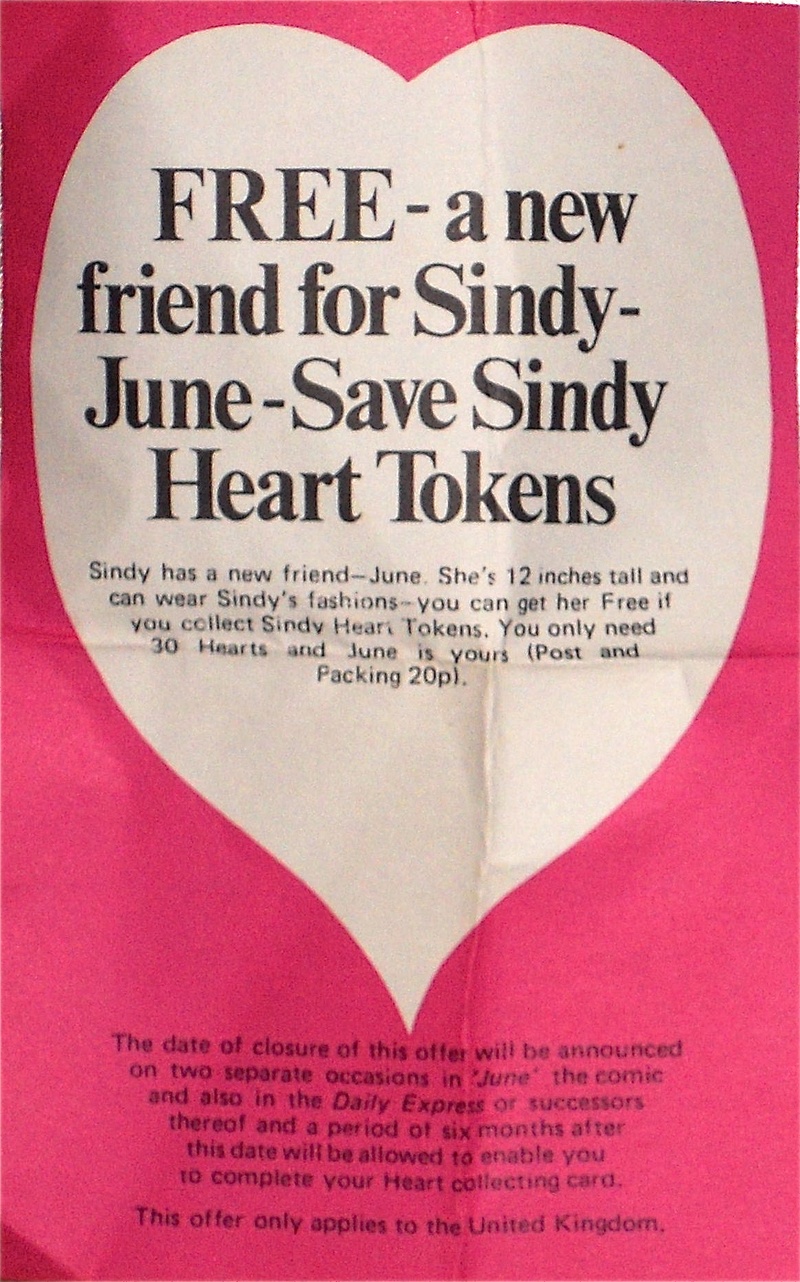 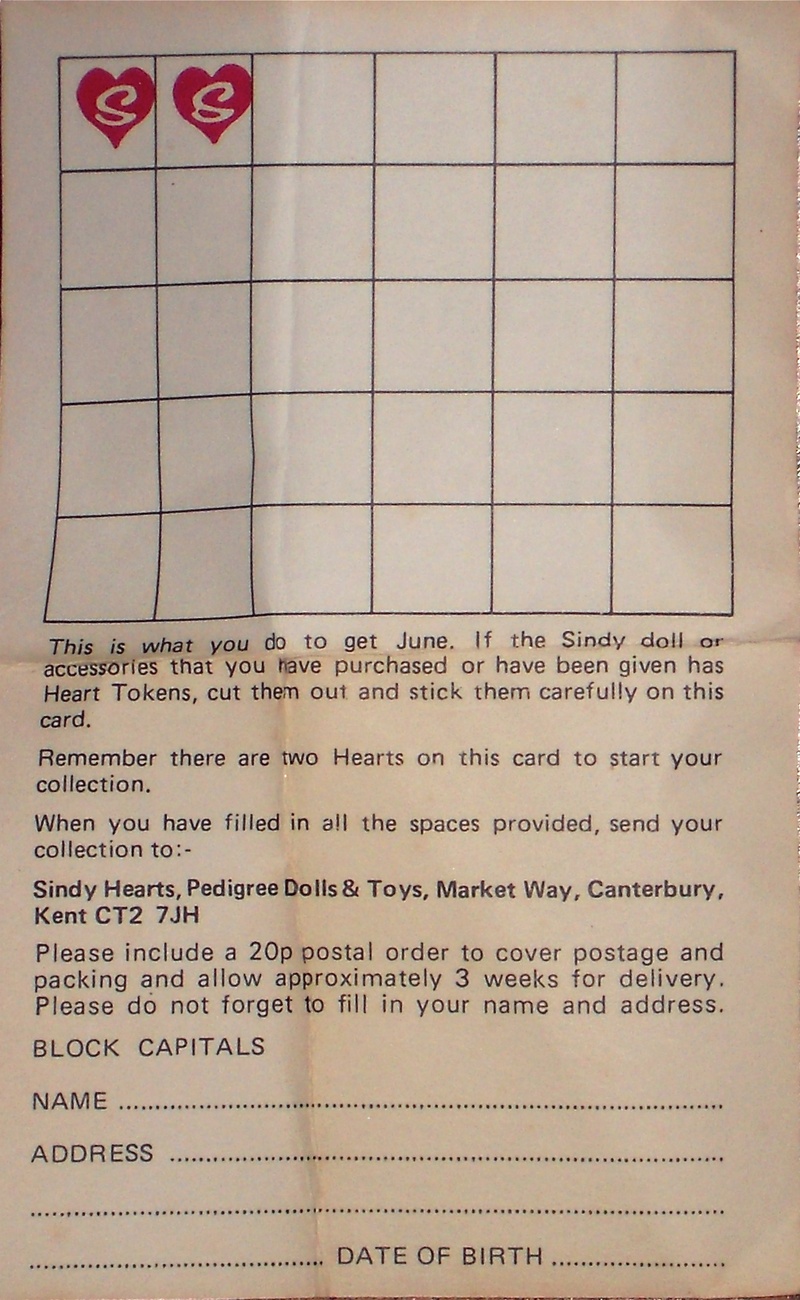 We also have a question about what she wore when she was despatched to her new owner. We have shown her in white pants to preserve her modesty, but we would be interested if anyone an recall what their Junes came in.

Shown below is a June and her original posting box. We think she must have been one of the last Junes as the postage date on her box is 11th June 1976. She was found wearing a pair of yellow nylon pants. We don't know if they are original but as she seems to have been wearing them for the last 36 years we have left them on her. They are made from the same material as the nylon underwear set that came with Sindy's 1974 'Negligee' outfit. Except that this pair has higher cut legs and the elasticated waist is made with an orange overlocking stitch. 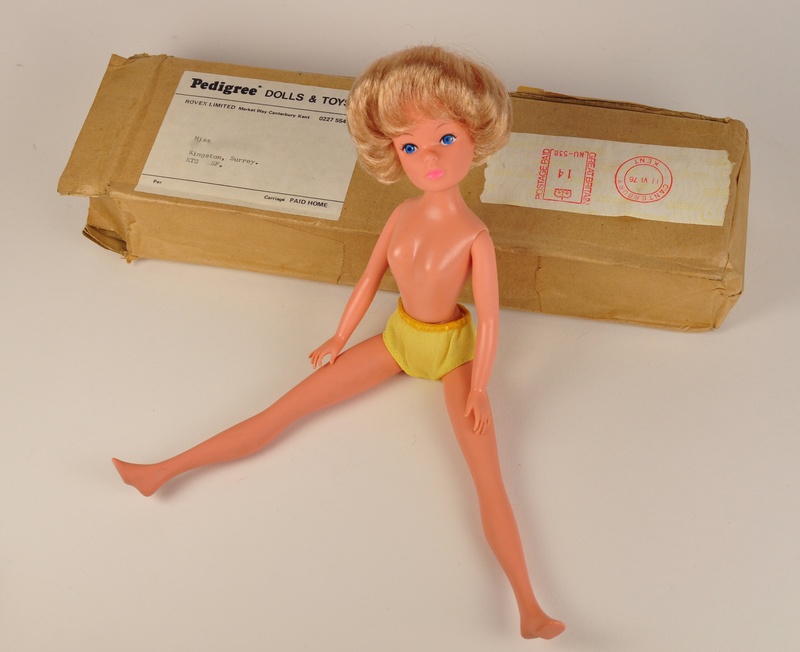 The address on the label was typewriter typed (we have obliterated some of the address for privacy), and it was sent from the Pedigree factory in Canterbury. As you can see postage was 14p.

This June was the last of the Junes, in the years that followed the Sindy hearts collecting promotion offered different gifts instead.