Sindy Jack in the Box 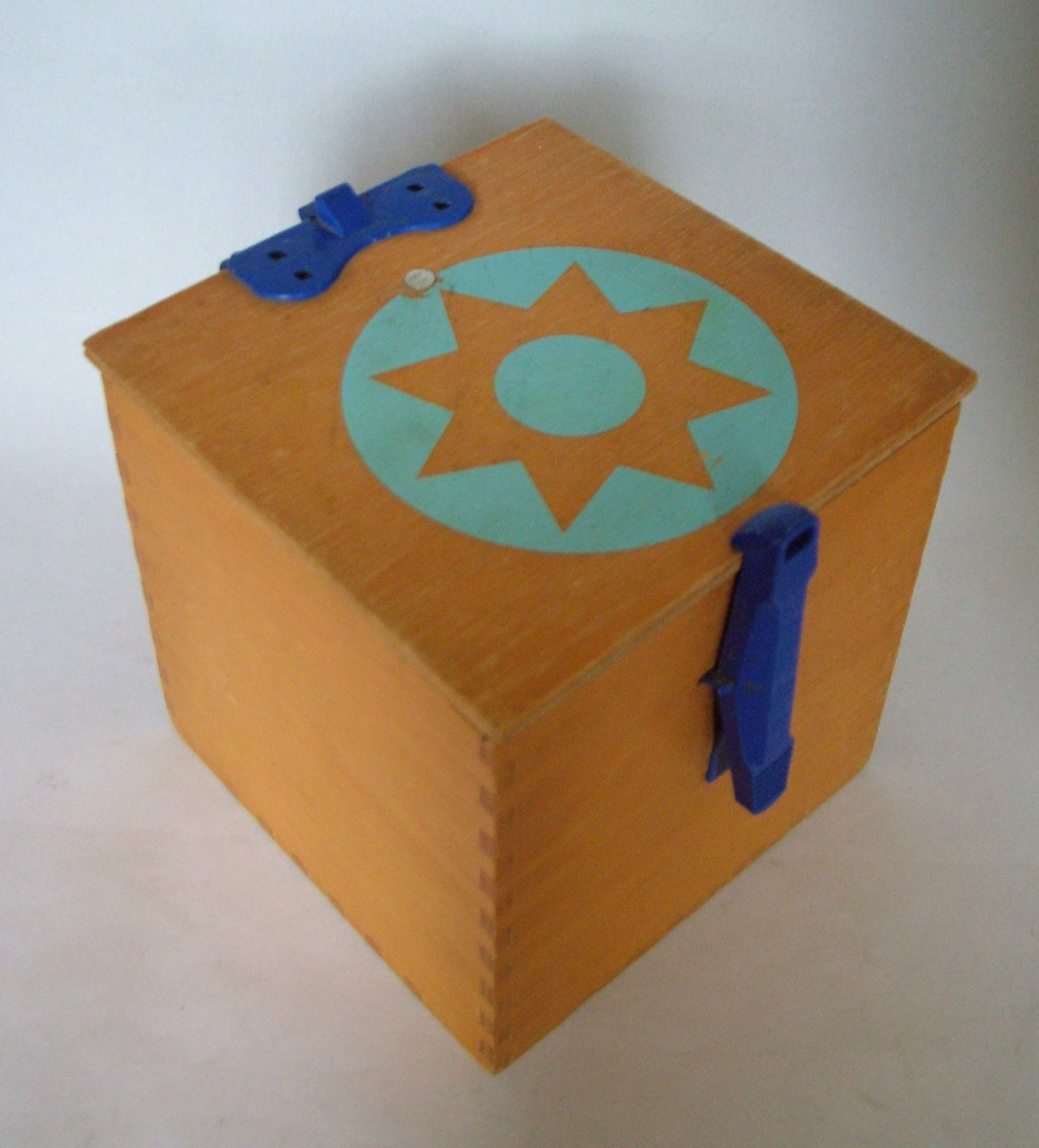 Here is a box, but it isn't an ordinary box. It contains something very wonderful inside. 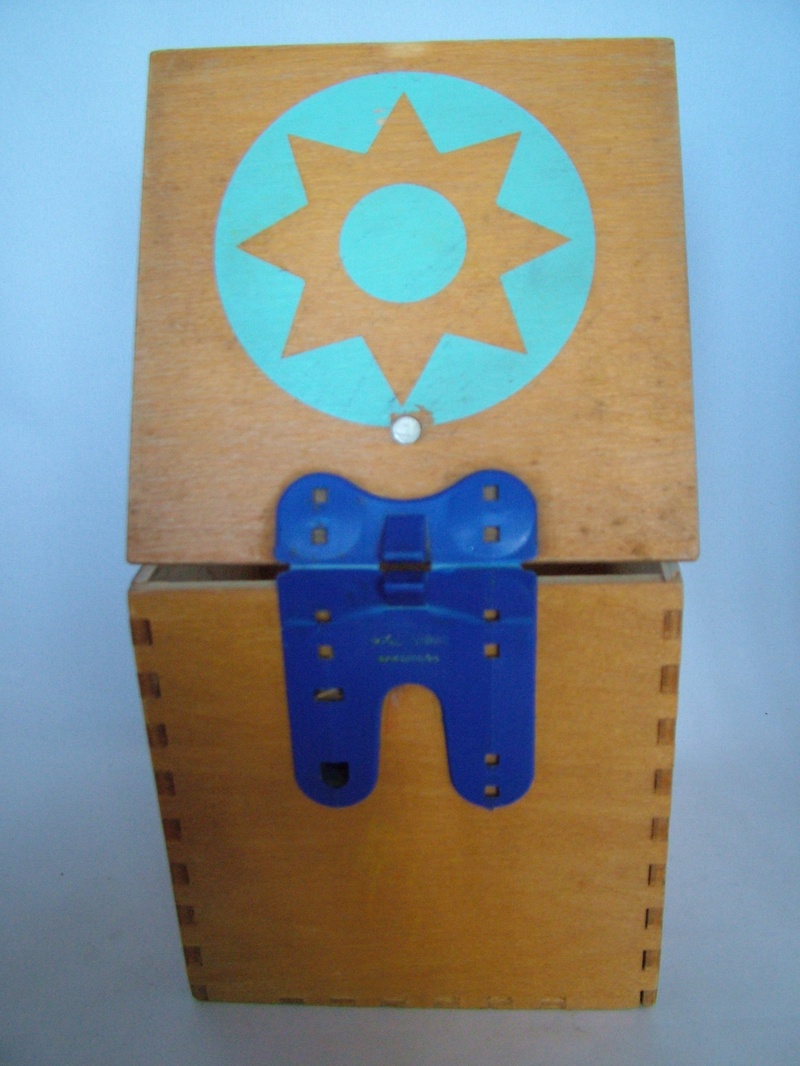 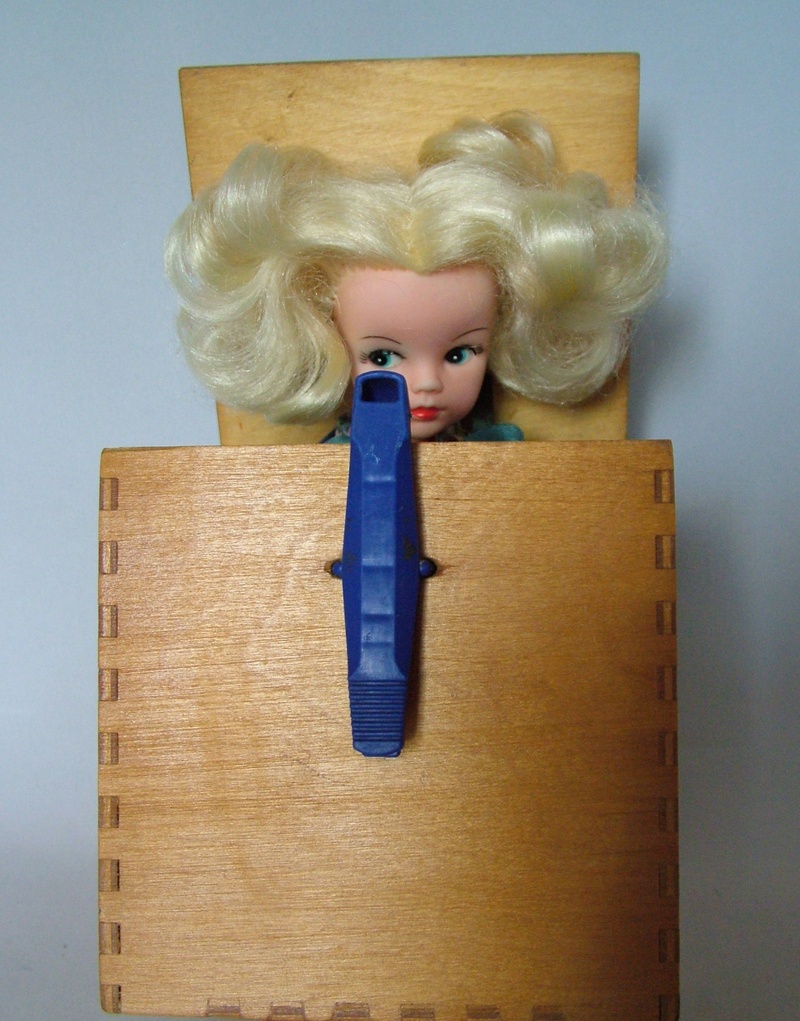 This box has a blue star and a blue plastic hinge to the back which is impressed “GOOD-WOOD” plus the Patent Pending number. There is a matching blue plastic spring release clip to front to fasten the lid shut and a metal spring steel clip fitted inside the box which activates the lid to spring the lid open when the blue plastic catch is released. Inside the lid is a chromium metal retaining clip for the Sindy head to slot into by her neck. 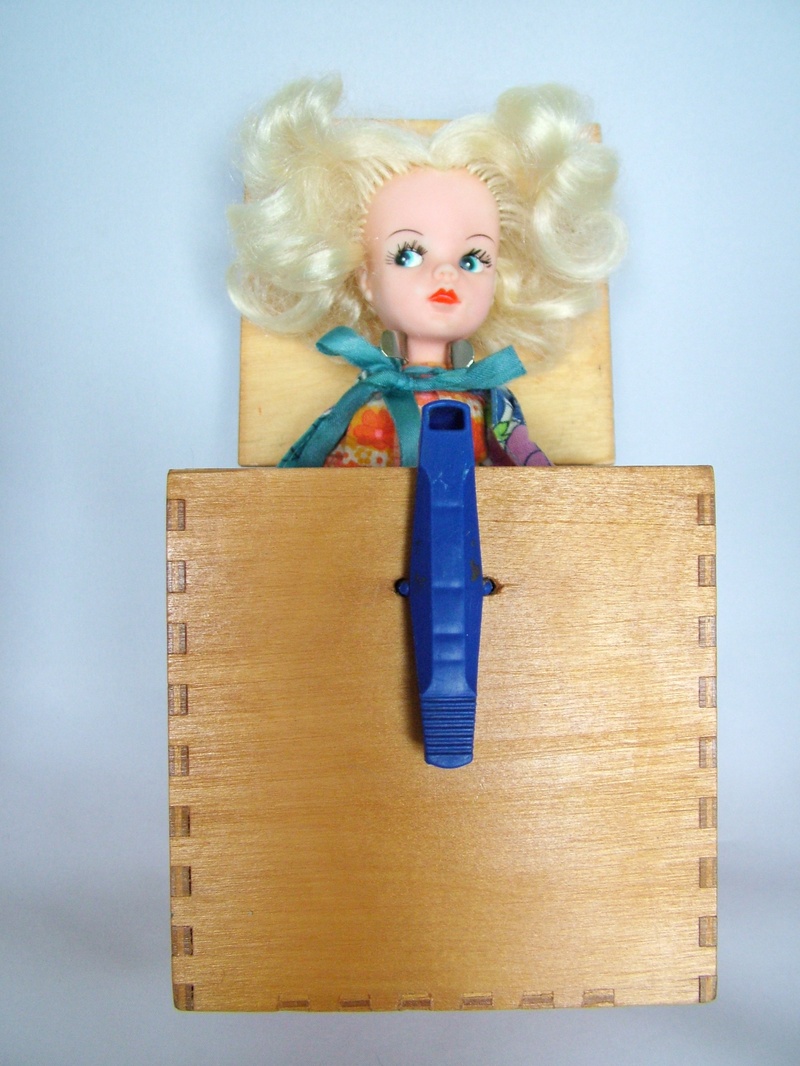 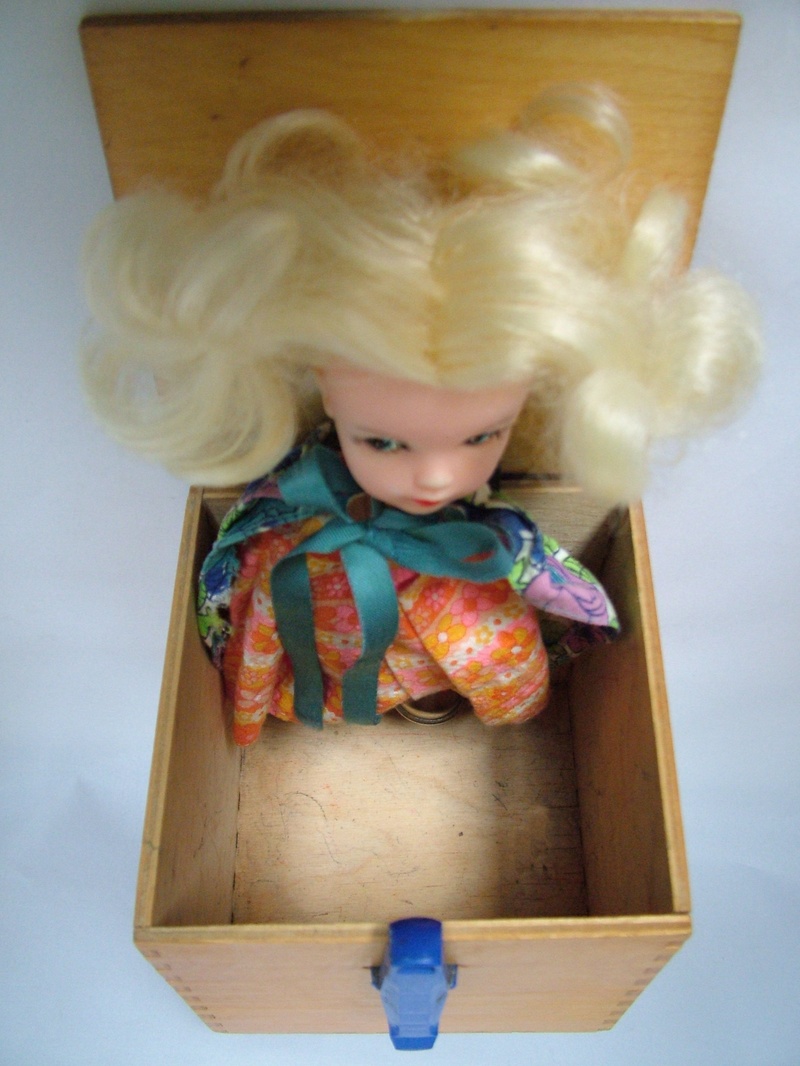 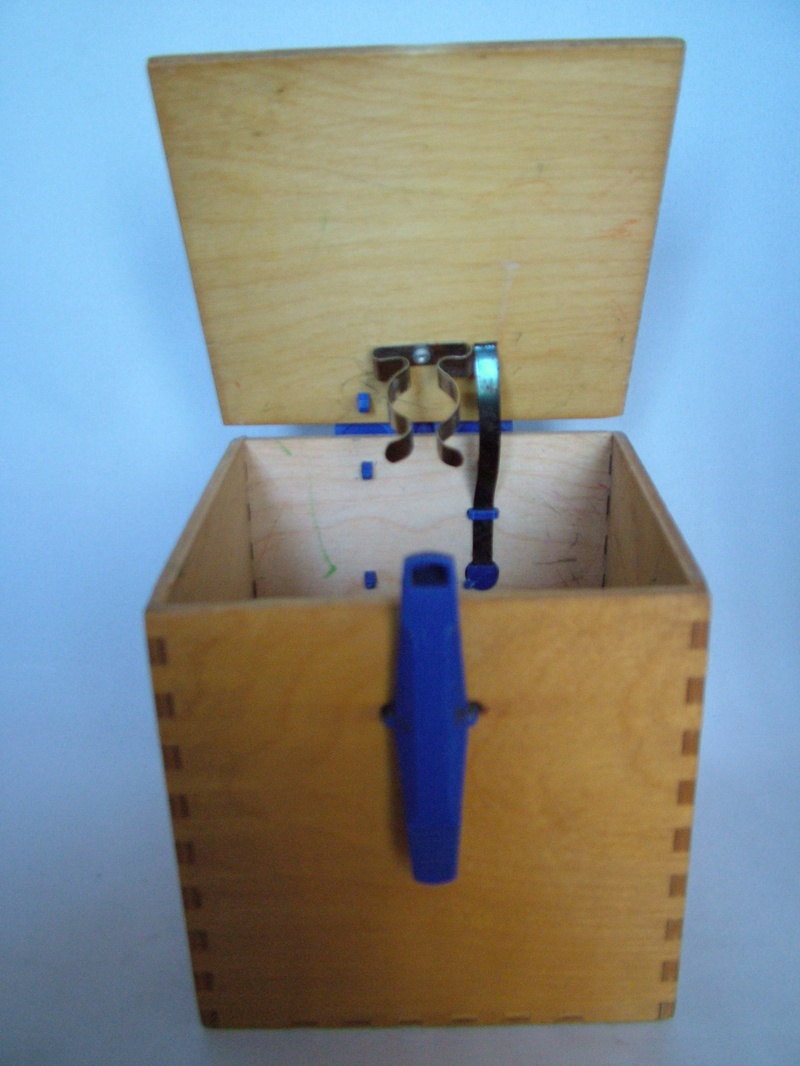 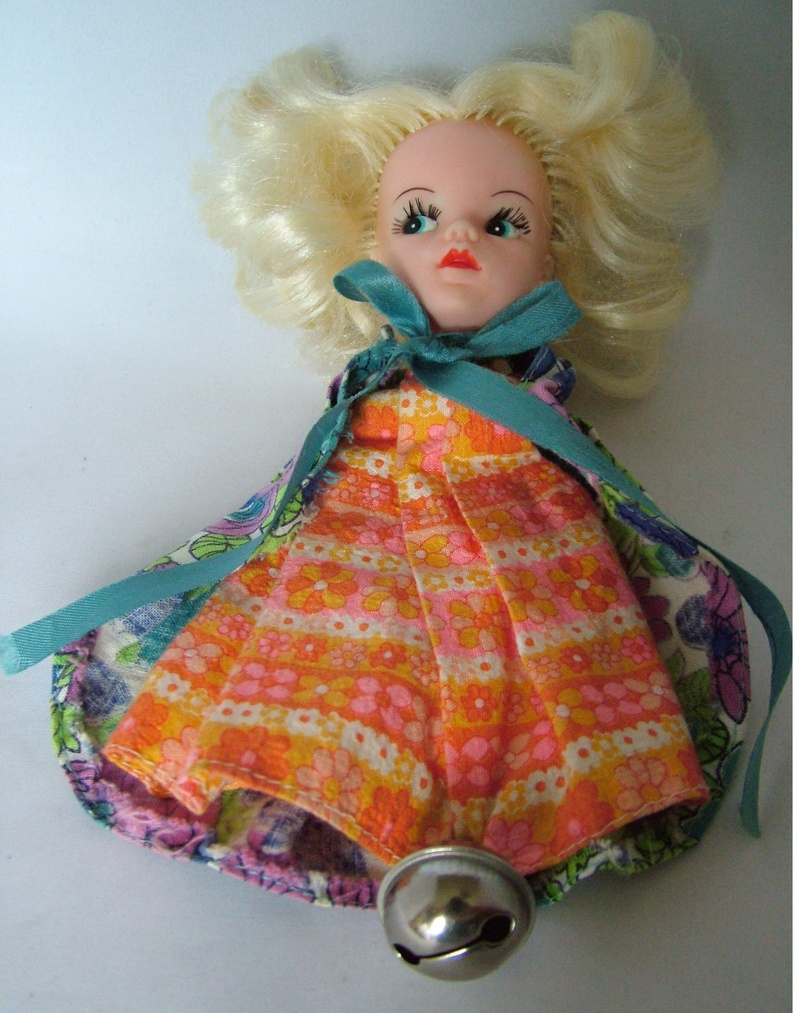 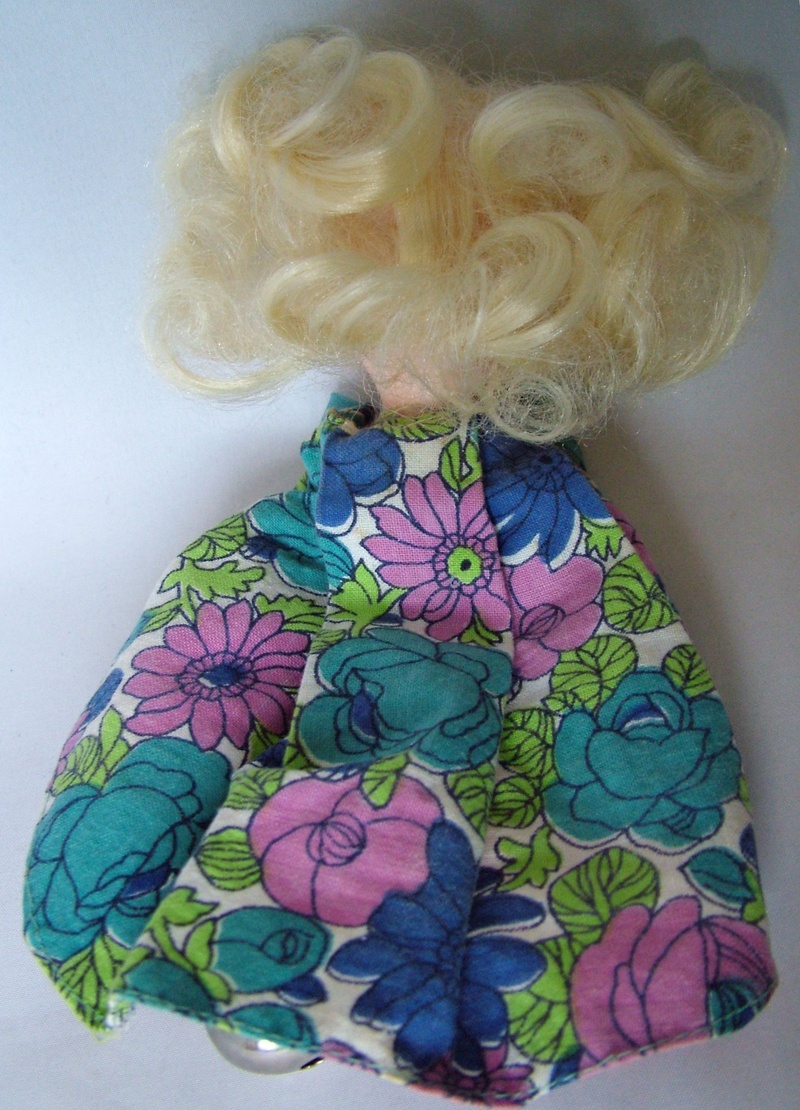 Sindy's outfit is exactly the same as the Sindy Puppets consisting of a cotton cloak with pale blue, lilac and navy floral pattern with green leaves on a white background, fastened by a pale blue ribbon. Underneath is an orange, pink and white cotton seersucker 'dress'. Please note this outfit is exactly the same with regard to the bow detail as the Centrepart Puppet also on display in the Museum. The dress forms an 'A' line shape with pleats neatly pressed in and attached to the bottom at the front of the dress with a metal rivet is a metal Noddy bell which jingles as the doll is activated.

This item was made by “Good-Wood Playthings” and we know that at the beginning of the 1970s this company introduced a new range of wooden Jack in the Boxes which were described as “a brand new approach to an old favourite”. The 1970 Tri-ang Christmas Catalogue and the 1970-71 Hamleys Catalogue both have photos of this new toy and show a Jack in the Box which was in a box with a green star on the lid, and a Bear in a Box which had a red star. We also know that the patent for the Jack in the Box toy itself was applied for in 1969 as can be seen from another example of the Sindy Jack in the Box shown below. 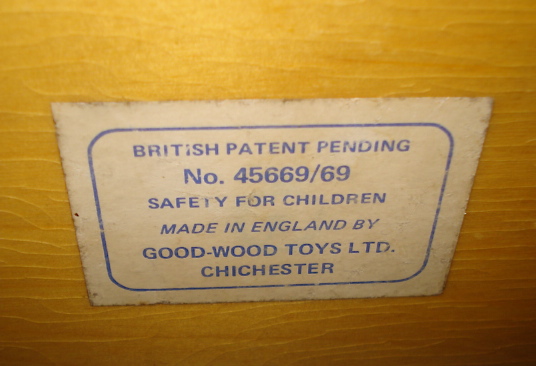 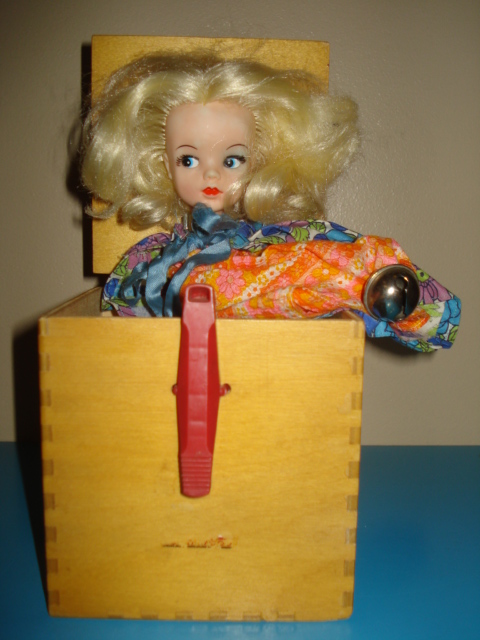 Interestingly, this Sindy came in a red latched box but with the same blue star on the lid. 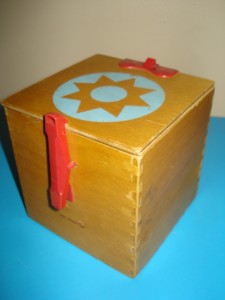 We do not know whether this Doll in a Box was released at the same time as the Jack and Bear. Perhaps the company saw a use for Pedigree surplus stock following either the Lines Bros. Group collapse in 1971 or the introduction of the new Trendy Girl and Gauntlet Sindys at the end of 1971, buying up these Centrepart heads to make a Jack in the Box aimed at girls. We wonder if this is the case because we know the Bear in the Box was described as being “for the very youngest set” and the Jack is fun but not very girlie, so a Doll in a Box would seem quite logical.

We believe that the Sindy Jack in a Box and the Sindy Puppets are contemporary because of the outfits, unfortunately we do not know how long this Sindy Jack in the Box was available for.