« Back to Our Sindy Museum Blog 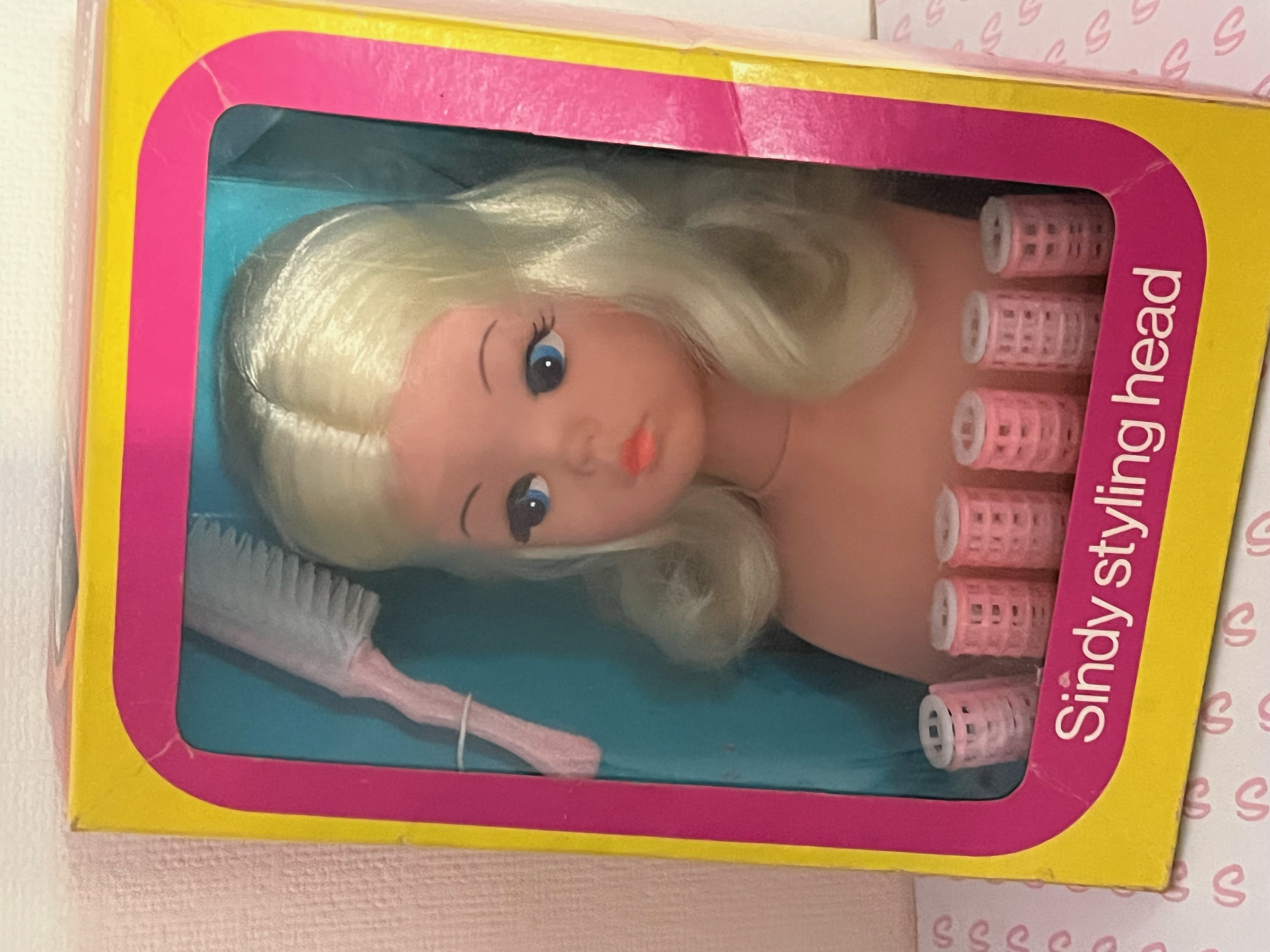 It's funny what you remember as a childhood toy, and that irresistible urge years later to find it again.

Lynn contacted us about the 1974 Sindy Styling Head because eventually she just had to buy back this treasured toy. This is what she said about owning her, "I sometimes pinch myself and think is she really mine and I am ever so tempted to take her out and style away. I’m very pleased I own her, she brought back a lot of happy memories".

I totally get that feeling and we are very glad to show this mint beauty in the Museum. She's gorgeous, and her box also provides an interesting insight into the hairstyles that were suggested for her. Personally, I never wanted to own a styling head until I saw this one, and she's really so very pretty...

We have taken this opportunity to remodel and complete the 1974 Scenesetters page, and so also now included is Sindy's 1974 Home, a second version of the pink Carry Case and the inflatable Pool Set.

Thank you Lynn for sharing, and to Katie who provided an insight into the Kelloggs Competition and that early Sindy Home. 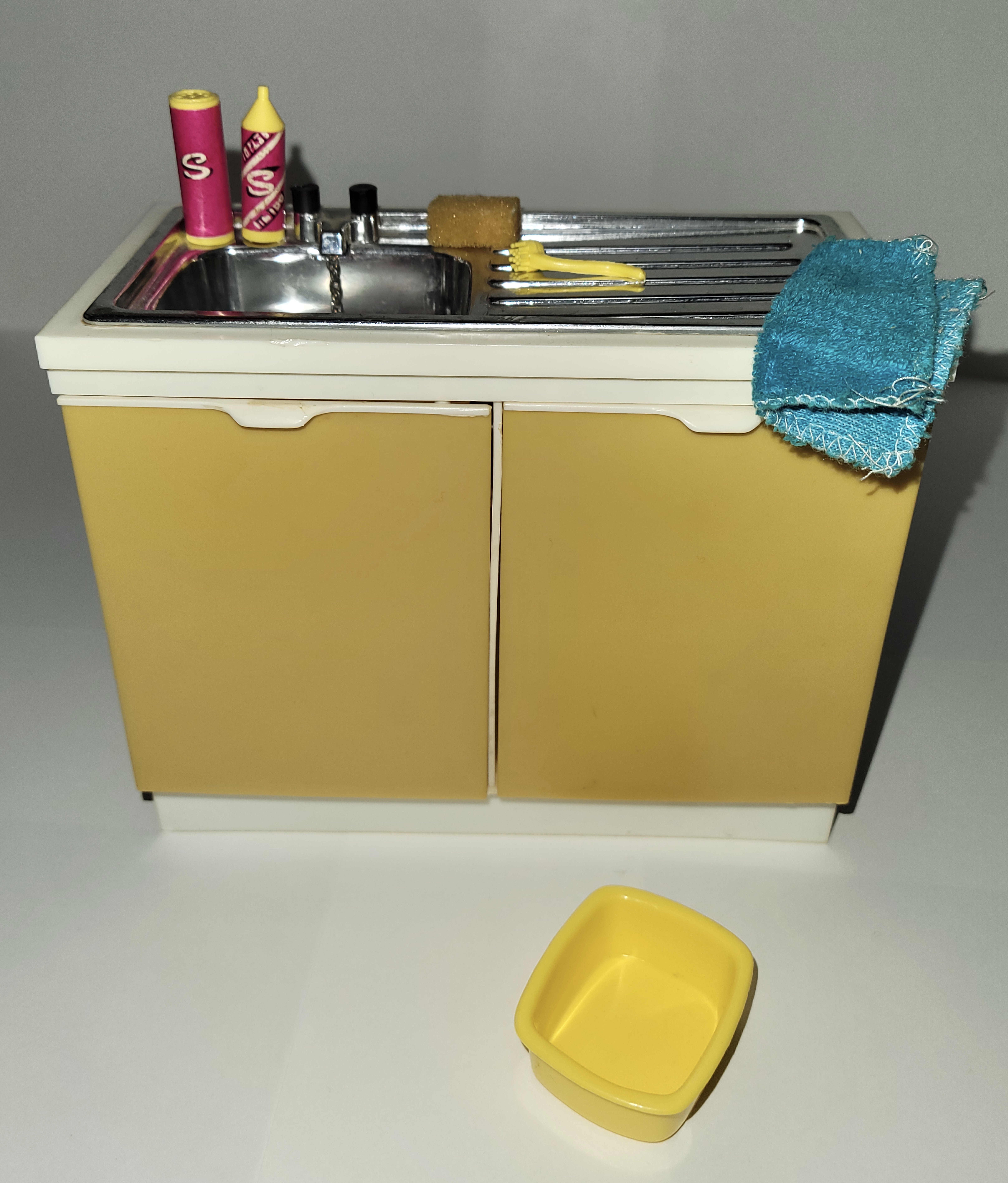 We first published our Marx Sindy page in 2013, and almost as soon as we published it our website provider changed their building tools and messed up the formatting of our new page. It had been a huge effort to get it online and I must confess that the idea of rewriting it was just too much. So, we addressed the most serious format and layout problems, and we let the page stand.

So, you may be wondering why I have chosen a Kitchen Sink to illustrate this entry. Well in the almost immediate reformatting by the website provider, we lost the sink and we couldn't retrieve it, and it has always bugged me. I was so happy to see this Kitchen Sink, sad but true!

Although Marx Sindy was only available for a few years and despite all its faults, our page on Marx Sindy has always remained very popular.

To begin with, I didn't really understand Marx. A beautiful Sindy doll dressed in a very drab dress, yet there was gorgeous Gayle and the beautiful scenesetters? What was this all about? But then you have to remember this was an attempt to enter the North American market dominated by Barbie, and really this was all about 'Sindy's world' and in particular the scenesetters with branding that could be used for Sindy or Barbie.

Marx Sindy furniture is beautiful and and it had items and refinements we didn't have in the UK. For example I love the blue lampshade to Bedside Table whereas we still had a pink one with an aqua blue set! Marx Sindy had a 3 Level Home, a Fridge and a Washing Machine before the UK. Many of these products were later incorporated into Pedigree Sindy.

Just recently we were contacted by four different collectors who wanted to contribute to our page. Lone from Denmark with her beautiful Gayle in the heart labelled box, Louise with her armchair, Anne Marie from the USA with her photos of some hard to find items which we knew about but couldn't show, and Nicole from Canada who generously shared her childhood collection which she has owned for some 44 years. Thanks also to Starla for her partially unboxed 'Let's Go to the Beach' mailaway when she learned the Marx page was being rewritten. Thank you ladies for your help and patience whilst the page was rewritten and thank you for answering so many questions.

Continuing thanks to Suzanne, Donna and Lisa and our anonymous donors who contributed to this page first time around.

We are still missing some boxed and packet outfits which we would love to show if you have them, and we have still questions about the Mailaway 'Let's Style my Hair' and in particular did it come with a towel?

Hope you like the new page and the new gallery created to go with it.

We need to talk about Patch...

Back in September 2003, a birthday party was held at Sudbury Hall Museum of Childhood for Sindy’s 40th birthday. David Fear, Pedigree’s Product Manager in the 1960s, was asked what he would have done differently with hindsight back in the 1960s. He replied, “Not Released Patch”. His reply was met with audible gasps from the audience. His thinking was that Pedigree lost its way by releasing Patch and Sindy's other friends, and they stopped focusing on their main product, Sindy (12S, Issue Number 9, Page 8).

We know that by beginning of the 1970s Line Bros. Ltd, Pedigree’s parent company, was in trouble and in 1971 they called in the Official Receiver. Pedigree, along with some of the other Lines Bros subsidiaries, were subsequently sold off to Dunbee-Combex-Marx.

Whilst Patch is very well loved today, he probably wasn’t wrong. In business, variation leads to complexity, and complexity leads to increased costs. It can also result in a company taking its eye off its main product offerings.

Also, there was the issue of the huge number of Patch original outfits that were made. Warehousing and the maintenance of stock is costly; let alone the money that was sunk into buying that stock in the first place (which is dead money until that product is sold). Various accounts tell of how Patch’s original Mint in Box (MIB) outfits were available well into the 1970s, long after Patch herself had been delisted. Indeed, it is still relatively easy to find MIB Patch outfits on auction sites such as eBay today.

Pedigree used a number of different ways to clear that stock. They introduced in 1970 a Patch dressed in just a baby doll nightie, probably hoping that new owners would want to buy clothes for her. At the same time, the prices of those outfits were reduced.

Additionally, Pedigree had introduced Poppet who could wear Patch’s clothes and in the 1970s after Patch was delisted, the 1st edition June who was the same size as Patch.

All of this brings us to the Debenhams Patch. Dressed in just a pair of panties, this pretty doll was available, along with a special offer of discounted original Patch outfits in Debenhams. She was probably a last-ditch attempt to clear the warehouse stock.

We are delighted that we have been able to add that last Debenhams Patch to our final 1972 page for Patch. She’s a lovely doll. Please do take a look, and if you have any more information on Patch in her final years or the Debenhams Patch, please do get in touch.

Grateful thanks to Gill for sharing another of her lovely boxed dolls, and also for yet again answering so many questions about her.

Today Sindy is 58 years old and our website has been running for 11 years now. We wish we could say that we were looking as good as Sindy does with those extra years.

It seemed a good idea therefore to return to one of Sindy's nicest party outfits to update it with a couple more variations for her birthday. Hallo Dolly (Ref 44232) is a wonderfully exhuberant 1975 Outfit, it's very pretty although a little fragile as the material frays very easily. In the mid 1970s, there were a few dolls, such as Mego's Cher (1976-81), dressed in gorgeous stage show outfits and it's good to know Sindy had one too.

So today we have added a two variations, making a total of seven that we now know of. Added today is a very beautiful French variation in a beautiful bold red pattern which is usually worn on brunette Sindy. This variation is from Isa, thank you!

Isa writes a French doll blog and her main collections are Petra, Tressy and Bella Cathie. I like doll blogs because I know I am very Sindy focused and it's good to just read widely around the subject of fashion dolls so that you can understand her context.

Isa's blog can be found here and if you are not a French speaker, don't forget you can use Google translate to read websites in a foreign language

There is always a great feeling of satisfaction when we can complete a previous year with a hoped-for missing item.

A long, long time ago we asked if anyone had the beautiful McSindy outfit with the orange and blue kilt. We knew this was a big ask, it's a difficult outfit to collect anyway and NFRB (Never Removed From Box) seemed almost an impossible request. But we were given the yellow & black version and the blue & black version, so we thought we could at least ask.

Starla, who is an awesome doll collector, has now generously donated a pic of her NFRB orange and blue version to complete the trio of NFRBs McSindys that we know about.

1976 Sindy Outfits and Separates has now been updated and we remain grateful to Annet and Jacquie who provided the original two variations.

So that's another set of variations we believe we found, unless you know otherwise...