On Sunday 20th March 2011, we took the Sindy Museum out onto the road to the Alresford Community Centre in Hampshire where a celeb 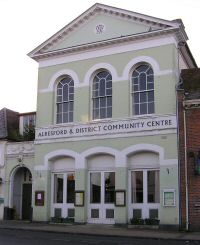 ration of toys event was being staged.

We were not sure whether we would be able to go. As some of you know, Kathy's Mum was very unwell and unfortunately she passed away on the Thursday evening before the weekend. However, Kathy's family were determined that she needed a break and so we decided we'd go ahead. We didn't tell anyone what we were doing because we didn't want to make a fuss. We just wanted to go out and under the circumstances try to have some fun with our joint collections.

Because of the uncertainty of whether we could attend, planning for the event was therefore quite difficult. It's not a grand event or anything, and because it is a very simple set-up, you put your collection out on trestle tables, we opted for big things that looked nice and which would be harder to misplace. Also, to a certain extent we had to work on the basis that if something was lost or damaged, we had a replacement or we could replace it relatively easily. 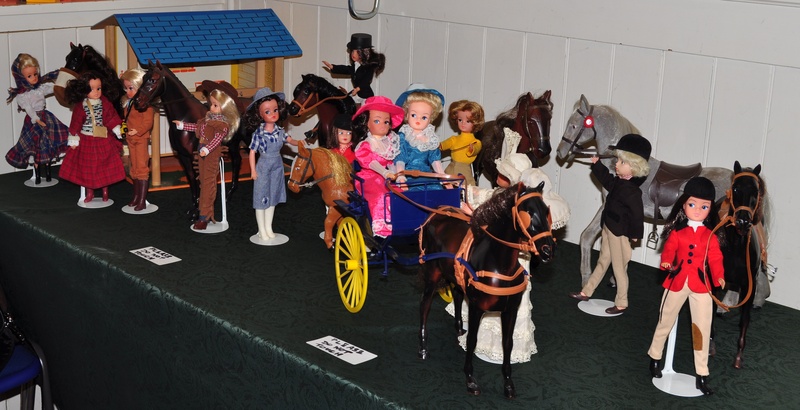 Our main display was the Sindy horses. As Annie said, her car boot nags were going to have to work for their living. We brought lots of Sindy dolls and outfits appropriate to the horsie setting. We had some Patch dolls, and Pixie, the horse & carriage with some beautifully dressed Sindys in 1977 'Royal Occasion' and 1982 'Fair Sindy' and 'Fair Lady', her wooden stable and the blue horse box (courtesy of Johnny Clarke of sindyourpedigreegirlofthe60s fame) who kindly went up into his loft at short notice to find it for us. 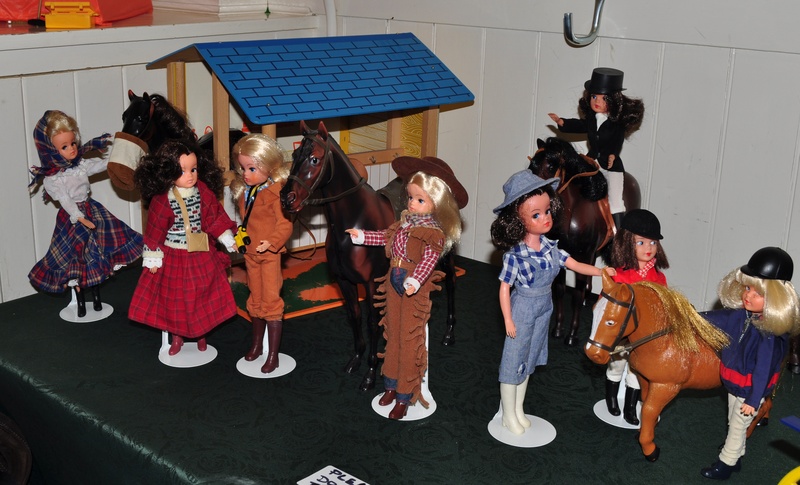 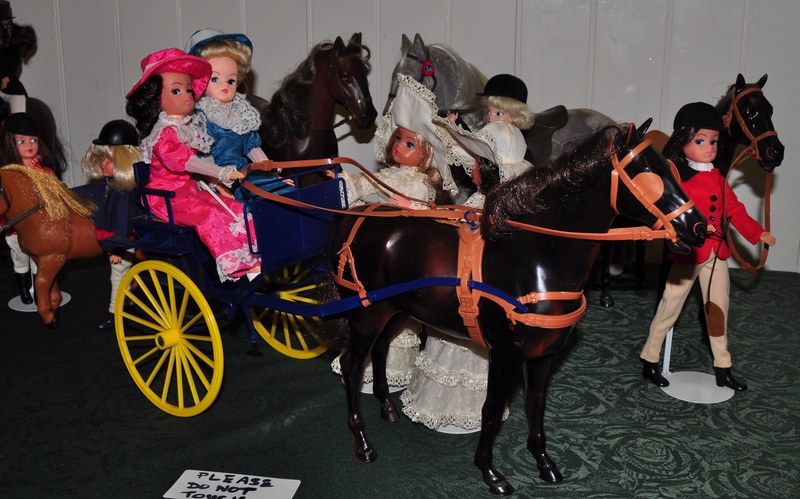 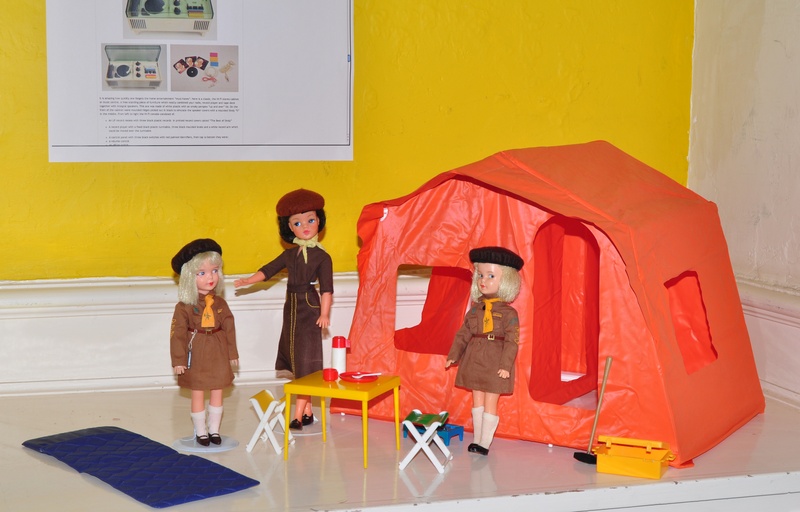 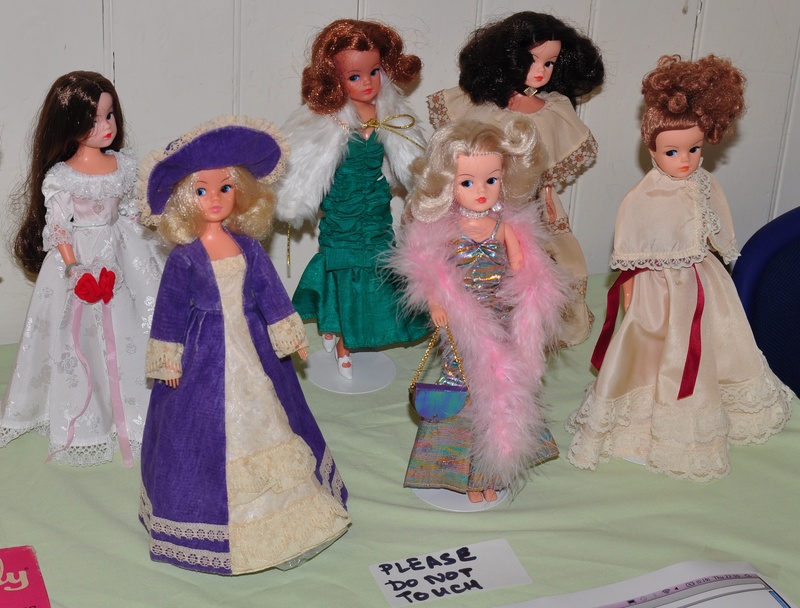 We set up a brownie camp with two sweet Patch dolls in their uniforms and a Trendy dressed as Brown Owl (with a vintage home-made brown tailored shirt, the brown skirt from 1979 'Mix n Match', the yellow scarf from 1983 'Pony Rider' and Amanda Jane's felt beret) and a selection of late 70s/80s camping scenesetters & accessories.

We wanted to show all the Sindys from the 1960s to the 1980s so we included some of each era plus two early boxed dolls, a Sindy and a Patch. We tried to use a variety of clothes, with dressy 80s dolls and outfits which would appeal to younger women and little girls (you might spot that 'Premiere Sindy' hasn't got her gloves or shoes on yet, they were still in Kathy's handbag when we took this photo). We added some of the older 1960s outfits which the older generations might remember. We also created a little scene with the 'Walk in the Park' pram being pushed by the 1978 Sindy nurse, with Betsy looking into the pram, and Patch holding the red setter dog on his lead. There was also, of course, ballerinas (Active Sindy).

Having been up until 1 a.m. the night before dressing the dolls and planning the arrangement, we then got up at the crack of dawn, loaded our cars and headed off.

We had a really lovely day. Lots of visitors came to talk to us about the Sindys. We met Sindy collectors, doll enthusiasts, and so many who had or who gave Sindy to their own children in the past. There was a real fondness for Sindy and a readiness to talk about her. We spent six happy hours talking about Sindy, Paul, Patch, the horses, knitting patterns and sewing, outfits, the horses, the brownies (who were very popular), the Sindy nurse who appealed to many who saw her, ebay finds, doll collections, Sindys given away or ending up being thrown away (eek!), special Christmas and birthday presents, oh and the horses. Kathy brought her big lever arch photos of all the outfits and we looked up outfits that visitors particularly wanted to remember. Other exhibitors and collectors who were interested in the Lines Bros./Tri-ang/Pedigree crossovers talked to us about her history, design and manufacture. 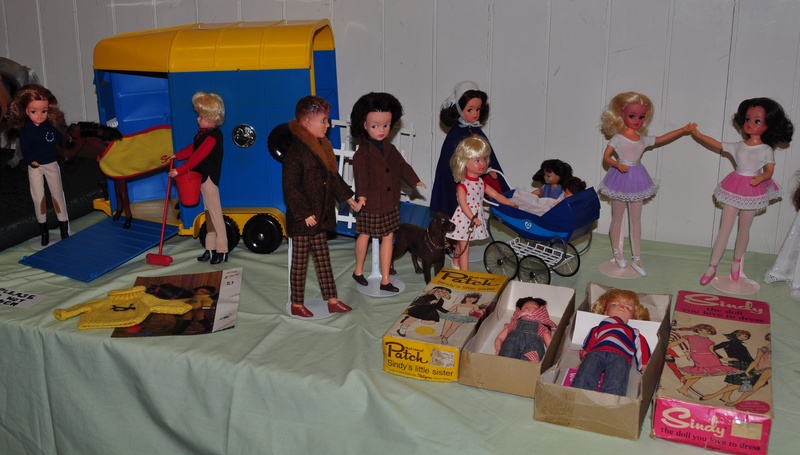 The day passed by so quickly, so very soon we were packing up to go home. When we got home, we discovered we had dry mouths, chapped lips and we were hoarse from having talked all day. But we had a brilliant time and hopefully our visitors did too. Loads of people said that it bought back many happy memories.

We do have one particular story we'd like to share with you. A lady stood looking at our display for the longest time without saying anything. In the end we approached her and asked her if she liked Sindy? She just nodded and turned away to go. We were a bit worried that we might have said something to offend her. Then she turned back and spoke. She told us adored Sindy, and that she had the short-haired blonde Sindy (the 1960s version). Then she explained that she was quite a shy person and when it was time for her to go to secondary school she had been absolutely terrified. So, she took her best friend Sindy to school with her everyday in her school bag. She dressed Sindy each morning for school in her own special replica school uniform which consisted of a navy blue skirt and blouse (we think it might have been from 1966 'Air Hostess'), a navy blue V-neck school jumper knitted by her Mum, and a tie made from the inside piece of her own school tie. Over this uniform Sindy wore a shop bought grey wool coat (perhaps 1966 'Happy Traveller'?). This lady never ever told anyone Sindy was in her school bag, but in that first year Sindy had been a great comfort to her as she tried to settle down to life in big school. We had to ask, did she still have her? The lady gave us a huge smile and said yes, her Sindy stood on her dressing table wearing a knitted dress that she had made from a vintage pattern a few years ago. She was still her most precious possession. We asked if we could write up her lovely Sindy story for the Museum? She said she would like that a lot. Sindy had been very important to her and she would like for her story to be known and remembered. (G. we do hope you see this and approve?).

That was the nicest part of the day, learning that our adult collecting hobby meant so much to so many people especially as they were growing up – well done Sindy!

P.S. Apologies, we complete forgot to take any photos of ourselves we were so intent on getting the Sindys ready!