Compared to Sindy's 1979 clothes, the scenesetters were quite straightforward and continued to heavily rely on products introduced in previous years. This year's developments were a redecorated Sindy Home and new dining room furniture, both of which were sorely in need of an update.

These new scenesetters were the 1978 Marx Sindy items repackaged for the UK market. Given that Sindy's original dining room furniture had itself been adapted the Louis Marx's US “Little Hostess” furniture from the 1960s, Sindy could hardly have been launched in America with furniture which was now at least 15 years old. She needed new modern dining room furniture and a Sindy home decorated to reflect current tastes in home décor. Thus the British market subsequently benefited from this update.

In the Pedigree literature Sindy's furniture continued to photographed and shown in play situations but now with the backdrop of the new Sindy Home and Sindys in 1979 outfits. To summarise the existing scenesetters previously shown:

Sindy's fabulous Eastham 'E-Line' kitchen was shown in all its glory and against the backdrop of the new home it was displayed as a fully fitted kitchen using a number of the units to create the scene. All the previous items and their accessories i.e. the Wall Cupboard (Ref 44546), Hob Unit (Ref 44547), Sink Unit (Ref 44548), Floor Cupboard (Ref 44549), and Wall Oven (Ref 44550) were available; as well as a 'Kitchen Gift Set' (Ref 44587) consisting of the Hob Unit, Sink Unit and Wall Oven.

Her original Camper (Ref 44542 - the buggy and tent) was now shown in the blue and white stripe livery which matched her caravan and it was described as “Every little girl needs wheels” - how true!

but the sweet little coffee table set Tea Time (Ref 44416) introduced in 1978 was not shown anymore.

Sindy's four “Mini scenesetters” with their “themed garment for Sindy” could still be purchased: 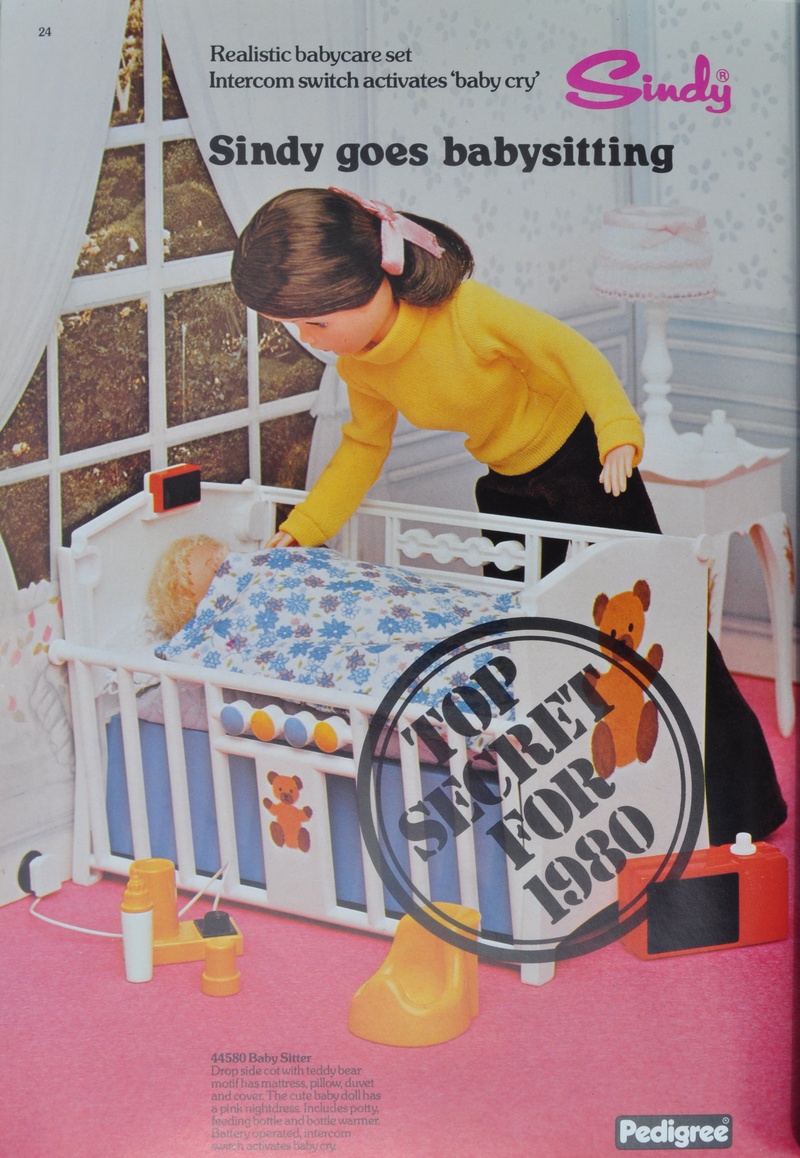 But the most intriguing scenesetter in the 1979 trade catalogue was 'Baby Sitter' (Ref 44580) which was shown as a "Top Secret" preview item for 1980.

It was described as a “realistic babycare set” with a drop side cot decorated with a teddy bear motif which had a mattress, pillow, duvet & cover. Also included was a “cute baby doll” in “a pink nightdress” with a potty, feeding bottle & bottle warmer, and a battery operated intercom which could be activated to make the sound of a baby's cry.

Although there has been various “sightings” of this set over the years, we have never seen one ourselves and perhaps those that have been seen were the prototypes.

It is widely believed that with the collapse of Pedigree's parent company Dunbee Combex Marx in 1980, there had to be some rationalisation and this scenesetter was dropped.

If you have anymore information on this set, we'd love to hear from you. 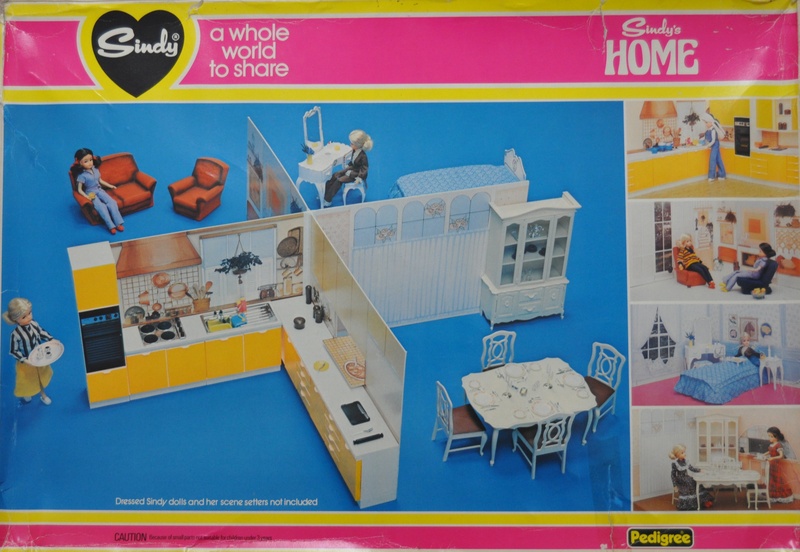 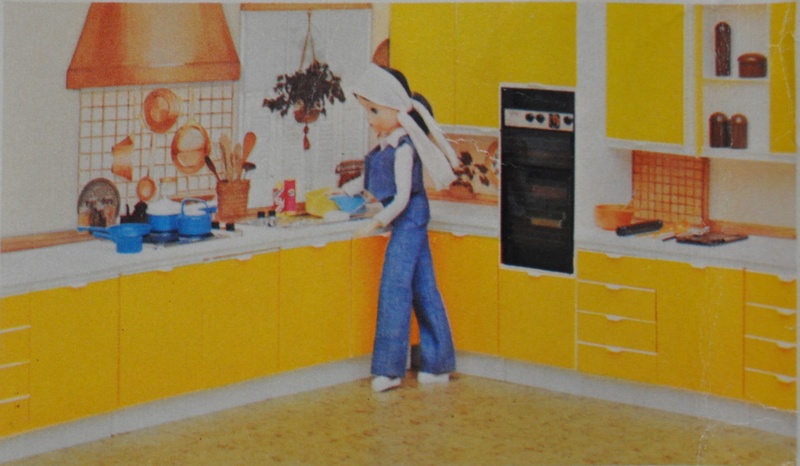 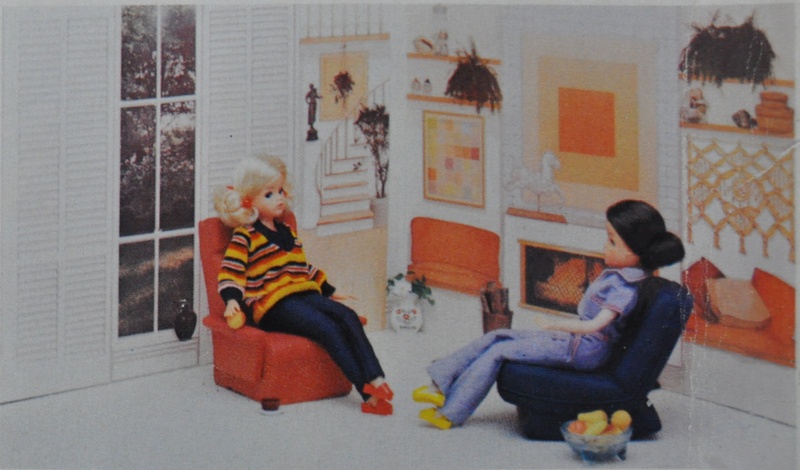 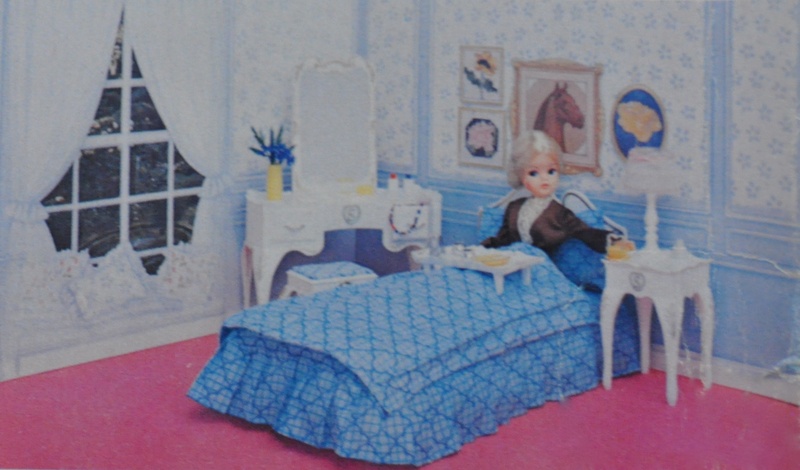 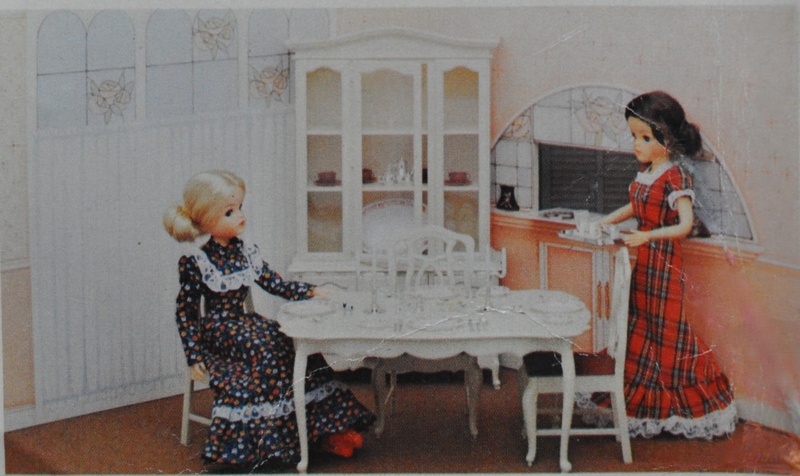 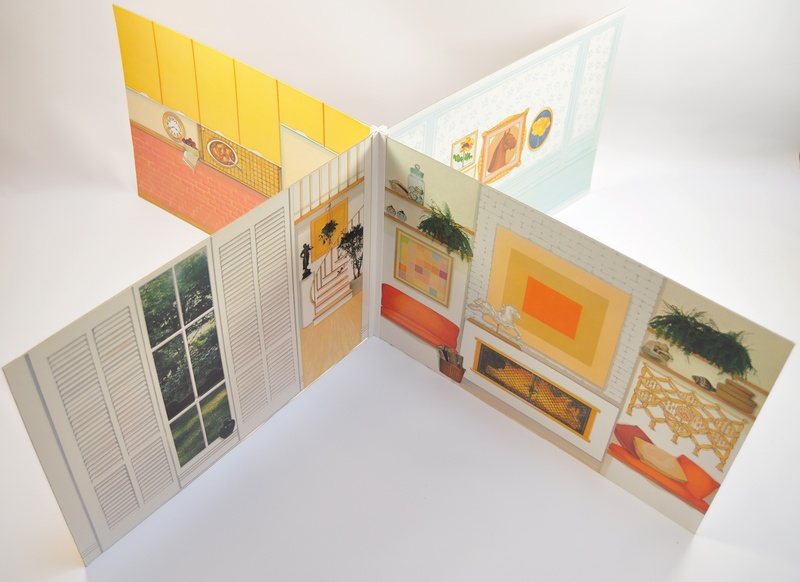 Unlike the 1975 Sindy Home, the walls of the 1979 Sindy Home were all the same size, providing four equally sized rooms. The interior design of this edition of the slot together home was much more ornate than the previous version, and this time there was no ambiguity about the rooms. The décor clearly provided a bedroom, kitchen, dining room and lounge backdrop which were much less interchangeable. The decoration was a mix of drawings and photographic montage and a new development was the introduction of illustrated windows with a scenic photograph behind which was really quite effective in conveying an indoors looking to an outdoors. 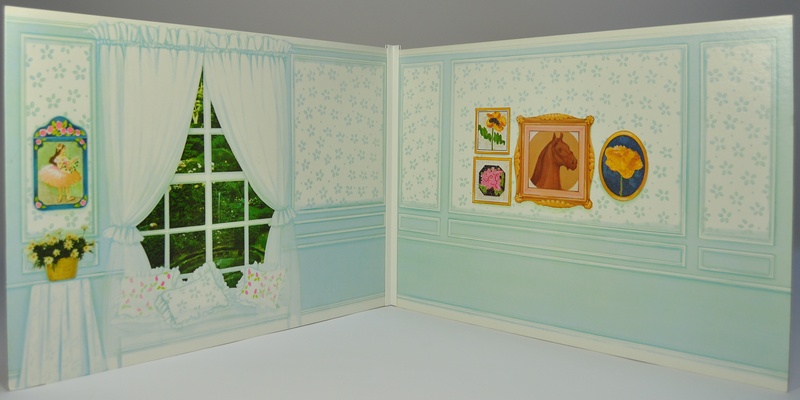 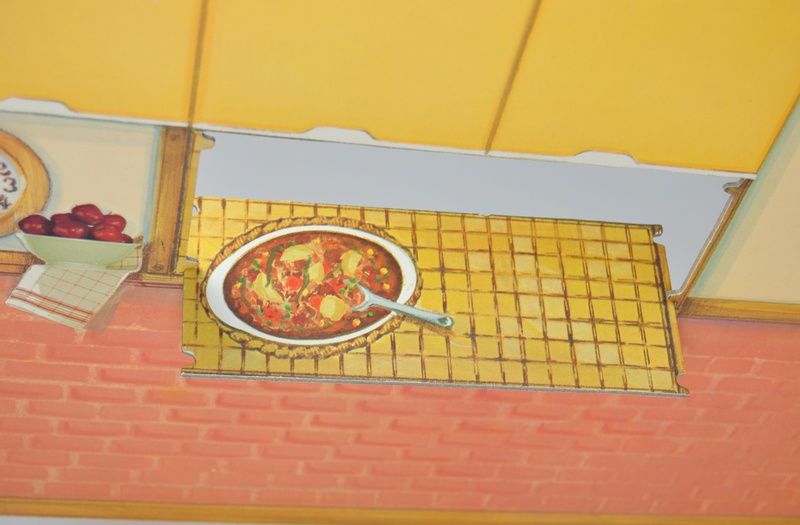 Also new was a serving hatch. The kitchen/dining room wall had a press-out cardboard rectangle with a reversible illustration of a shelf with a plate of food on it. 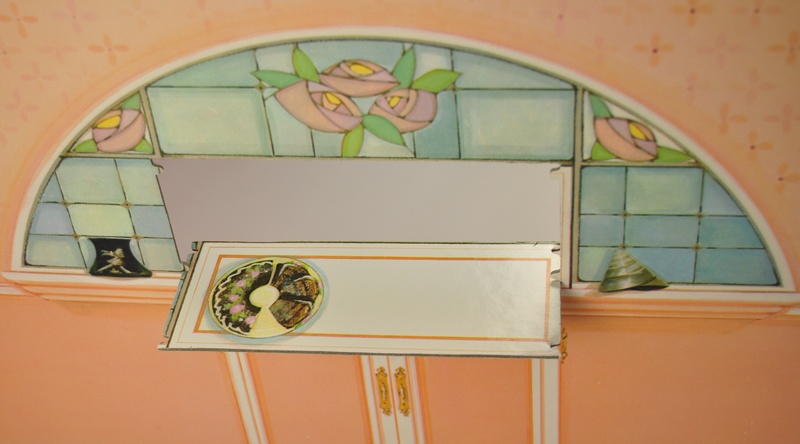 This could be fitted and displayed as a serving hatch shelf between the two rooms.

Interestingly, this home has been found bearing the original 1975 Sindy Home reference of 44543, indicating that perhaps it was available prior to the 1979 relaunch, or it could have just been a design & print error. 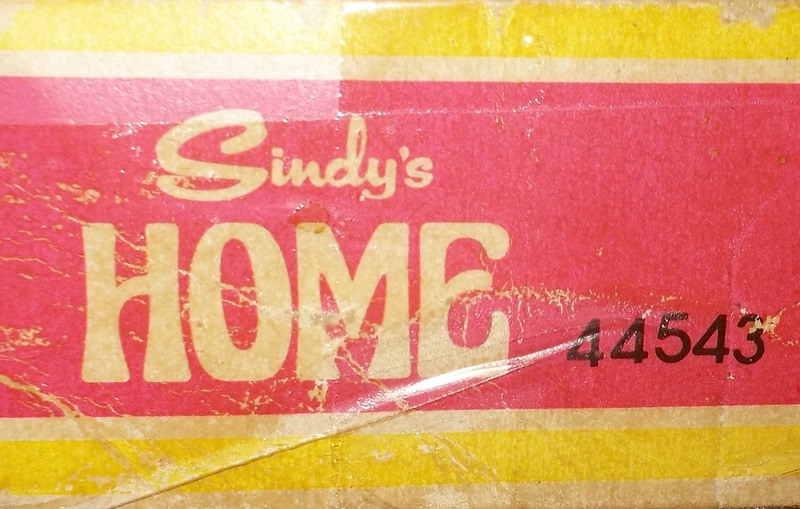 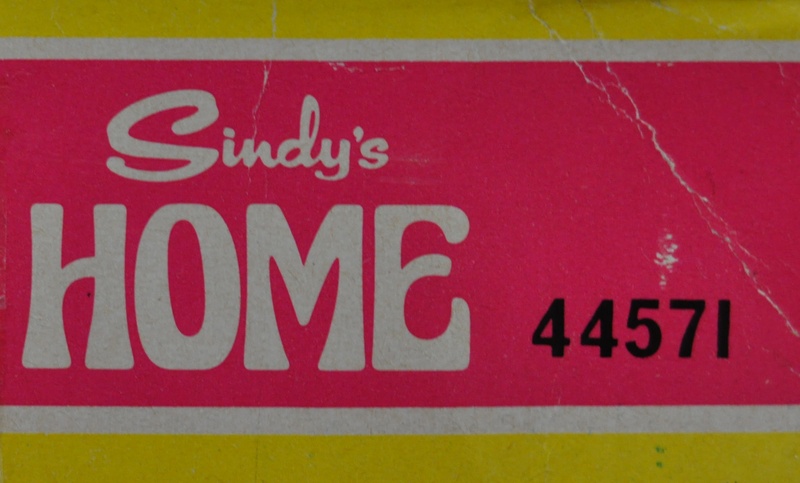 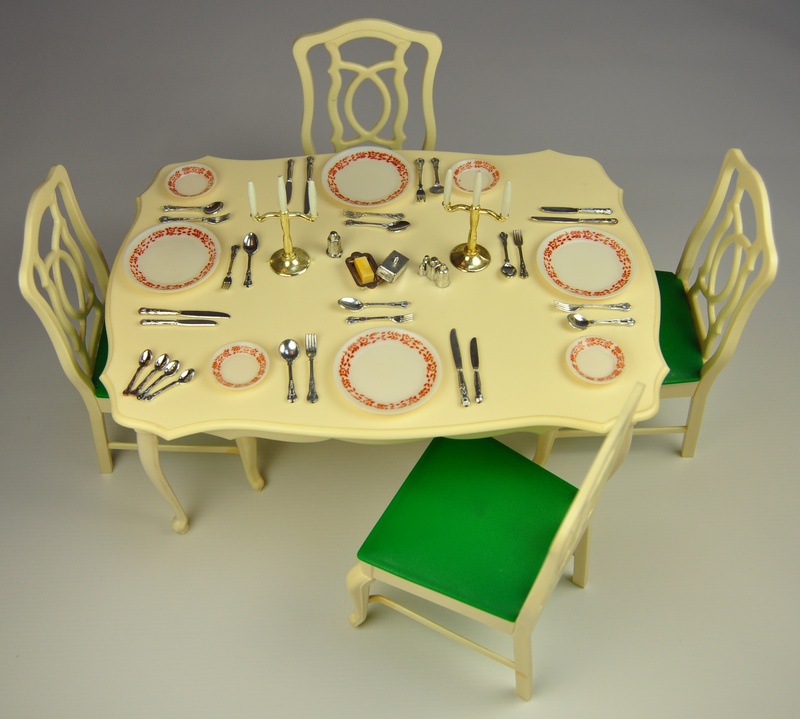 Sindy's new dining table again reflected current taste with the resurgence of interest in reproduction furniture particularly with a Queen Anne, Georgian or Regency influence. Indeed no furniture shop was complete without a vast range of reproduction nests of tables catering for every period and style.

Sindy's table was moulded in a creamy white plastic with a scalloped table top, stylised cabriole legs and claw feet. There were four matching chairs. The front legs of these chairs were again stylised cabriole legs with claw feet and they had cut-out tracery splat backs to emulate the intricate detailing of period chairs of the time. Although they were described as “upholstered dining chairs”, instead of the previously padded cushion seats, these chairs had hard plastic seats in a contrasting colour. Although the trade catalogue showed maroon coloured seats, we think this was the Marx version because all the UK ones we have seen have had emerald green seats and indeed the 1980 catalogue was updated and showed chairs with green seats.

This table still came with a four place setting. It consisted of: 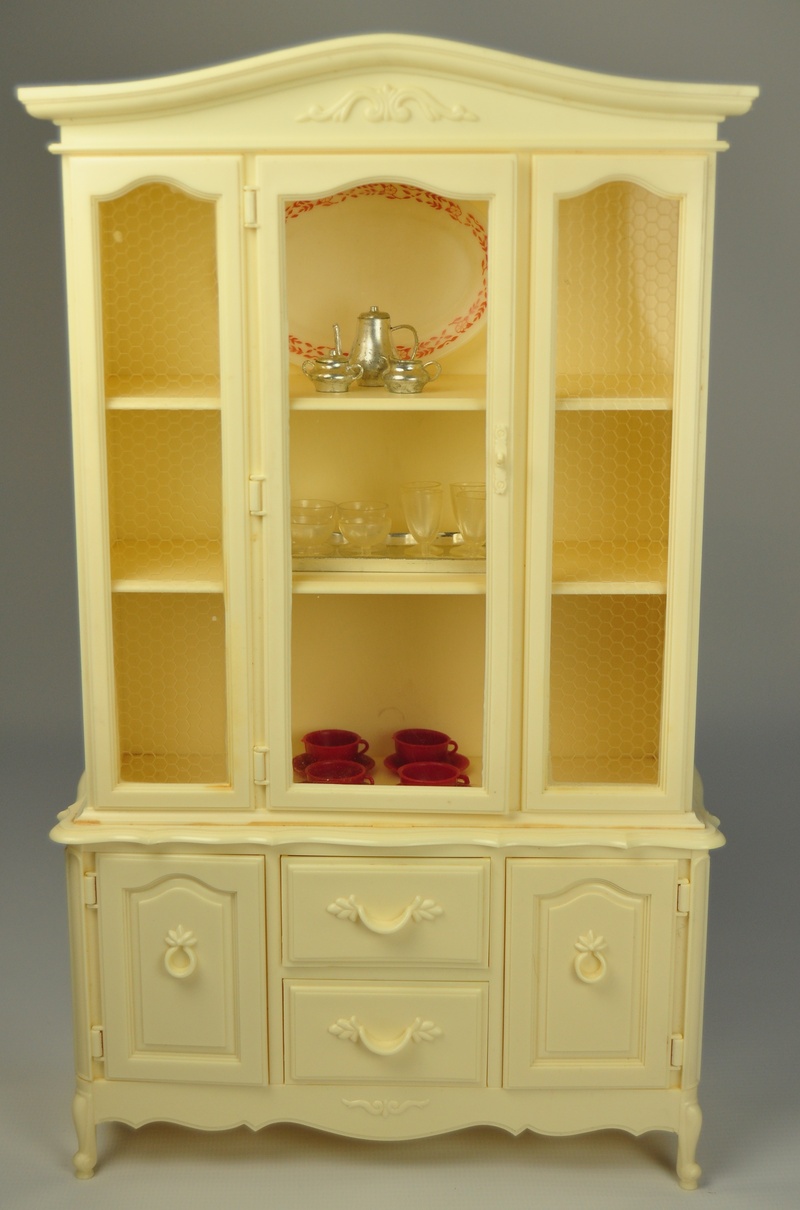 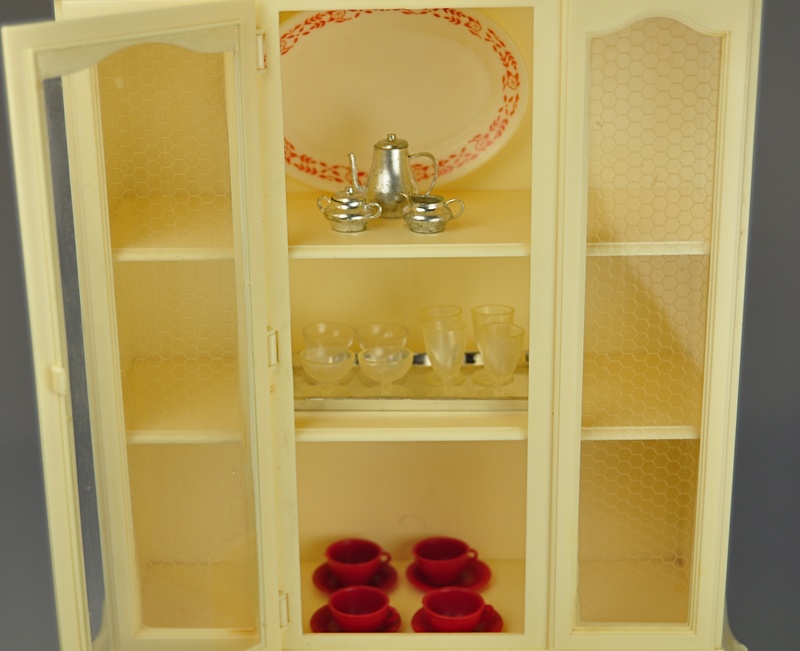 Instead of the now dated and old-fashioned sideboard, Sindy got a brand new full-height "dresser style" cabinet with the customary glazed display cupboard on top with drawers and cupboards underneath. Beautiful and practical, it was designed to match Sindy's new Dining Table so again it had that intricate reproduction look to it with cabriole legs with claw feet at the front, moulded & scalloped edges, and a moulded pediment and raised base plinth decorated with curlicue embellishments. The “glass” display section of the cabinet had two fixed panes of perspex etched with a honeycomb pattern placed on either side of a plain perspex “glass door”. The “glass” panels were fixed into moulded frames with shaped tops & beading. Even the handle on the cabinet door was moulded with a shaped backplate detailed with two screws. The base section consisted of two opening cupboards and two sliding drawers. Again they were cleverly designed with faux panelling & moulding and with stylised decorative ring and drop bar handles.

The cabinet also came with a set of accessories which complimented the dining table accessories. There was a selection of “china”, “glassware” and “silverware”:

In the US Marx Sindy catalogue this cabinet was called a “Breakfront”.  But, that is actually a piece of furniture, such as a cabinet or a bookcase, with a central section that projects beyond the sections to either side.