Sindy's scenesetters continued to be popular and 1975 saw the introduction of the first really viable Sindy home. The 1974 trade catalogue and style leaflet had noted that the Bath was “No longer available” and in 1975 Sindy got some new bathroom furniture. When you look at the bathroom furniture today it looks quite garish compared to our modern tastes for plain white or cream bathroom suites, but in the mid 70s coloured bathroom suite were very fashionable. Who can forget those wonderful new colour schemes with colours such as “Amber” (burnt orange), “Mink” (brown) and the ubiquitous “Avocado” (light green). Sindy's new suite was described as “Sun yellow” and it was very yellow.

Of her previous scenesetters from 1974 the following were still available, but they were now renumbered adding a 44 to the front of the previous reference.

“SINDY'S DINING” was the Dining Table and Four Chairs (Ref 44527) and her Sideboard which had a note to the photograph saying that its contents had been revised to a four place setting (Ref 44528).

With regard to the rest of the 1974 Scenesetters: 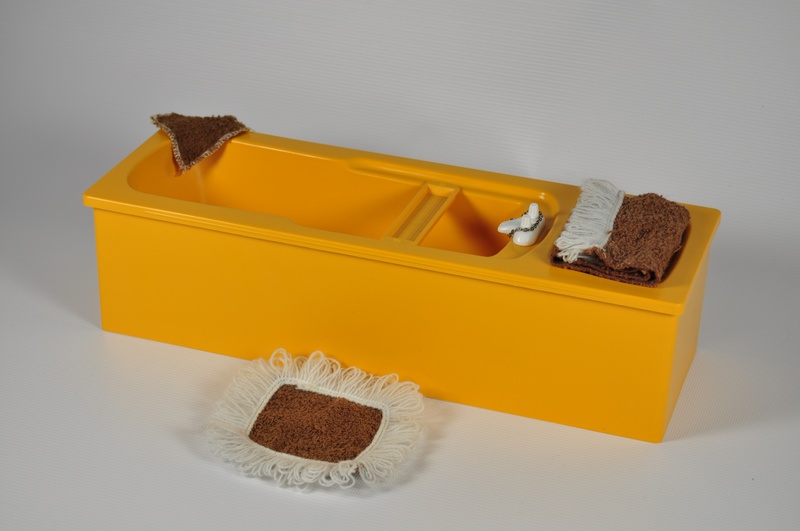 Unlike Sindy's previous bath, this one was not a “working” bath which pumped water. It was made in “sun yellow” plastic in a new streamlined shape. Where previously there had been the water tank behind the taps, there was now a moulded recess to hold her towel. It had a white plastic moulded mixer tap and a matching plug on a metal chain which could be fitted into a plug-tidy between the taps when not in use. There was a matching yellow plastic bath rack which had a moulded Sindy “S” on each end and a faux-grid base. The bath came with a new set of bathroom linen, a brown cotton towelling square flannel hemmed with white thread, a matching rectangular bath towel with a white wool looped fringe at each end, and a square shaped bath mat trimmed all the way round with the same fringing. 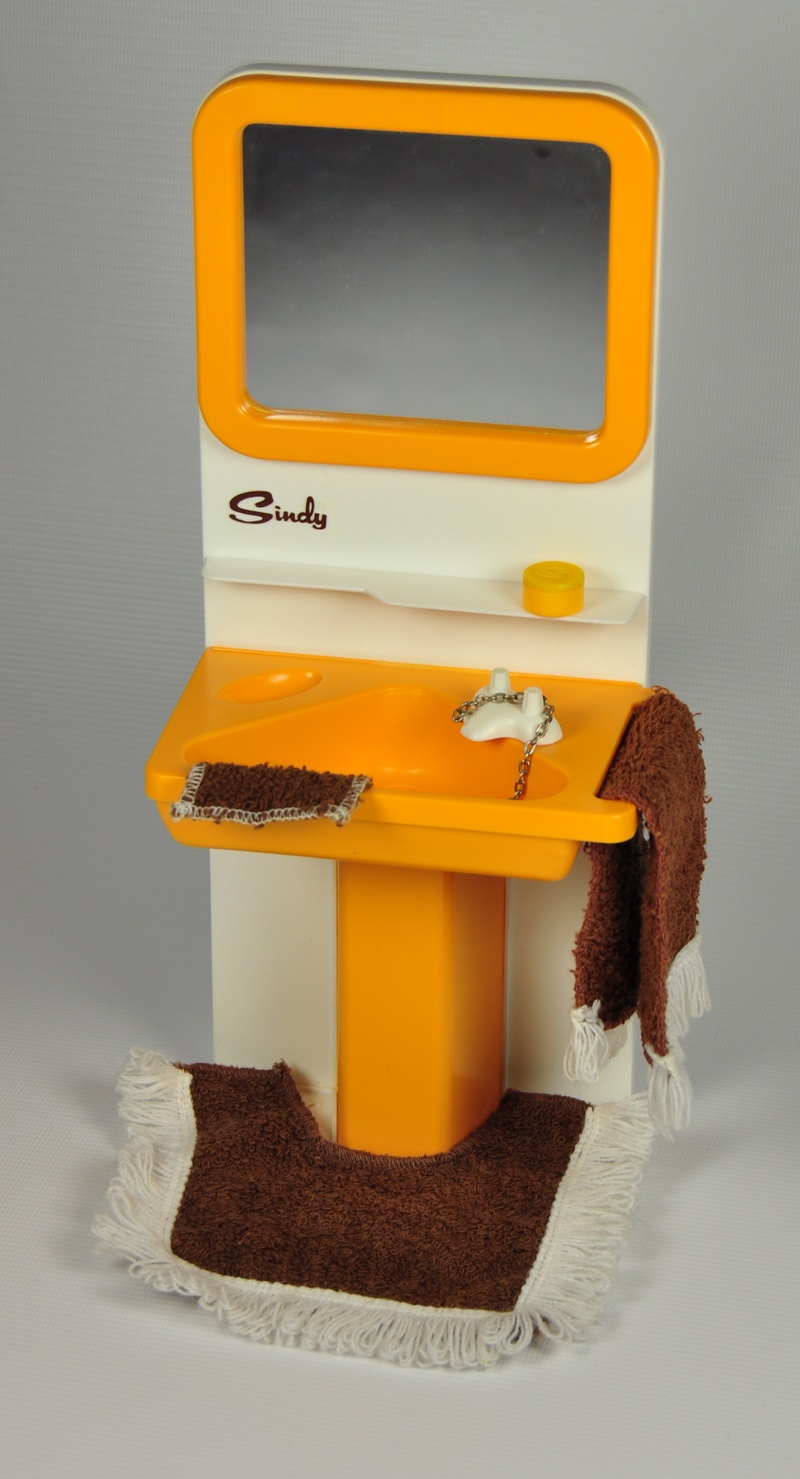 Sindy got a brand new piece of bathroom furniture, a bathroom sink. Also made from moulded "sun yellow" plastic, it was a pedestal sink and it had a triangular basin with a plug hole, with a moulded recess on the left for her soap and a moulded hand towel rail on the right. It had the same white plastic moulded mixer tap and a matching plug on a metal chain as the bath. The washbasin stood on a rectangular white base with a moulded “Sindy” in front of the pedestal. There was a white plastic backboard behind the washbasin with a white cosmetic shelf and a make up mirror with a “sun yellow” frame. Again embossed on the backboard above the shelf was a moulded “Sindy” but this one was painted in a very dark brown.

The accessories for this scenesetter appears to have changed over the years. In 1975, the trade catalogue listed a “powder compact” (shown in white), brush & mirror (which looks to be the same as the 'Dressing table' set), the flannel and a hand towel. The 1976 trade catalogue does not list the accessories however the box shows them as being the same. However the contents of our 1976 boxed version are slightly different. It still included the flannel and towel but ours does not have a brush or mirror. Instead it includes a yellow plastic powder bowl with a moulded Sindy “S” on the lid with a white cosmetic puff attached to the underside of it, and a brown towelling pedestal mat with a white wool fringe. These new items are listed and shown in the 1977 trade catalogue.

This scenesetter was called 'Washbasin' in the trade catalogue and 'Wash Basin' in the style leaflet. 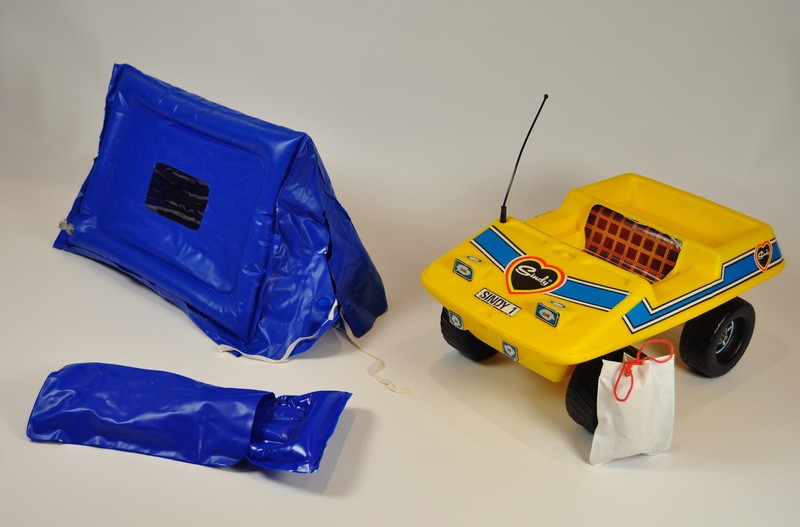 Sindy's new buggy was made of moulded yellow plastic. It was right hand drive, and it had big wheels with fat tyres described in the catalogue as “Mag style wheels” (magnesium alloy wheels). It also had a black plastic steering wheel (sadly ours is missing), a tow bar and whiplash aerial. It came with a set of colourful stick-on decals which later catalogues emphasised allowed for “child involvement” and “individual customisation”.

To complete the scenesetter Sindy got a new tent. However the one that was shown in the trade catalogue and style leaflet appears to have been a prototype as we have never seen it. The tent was actually a blue vinyl inflatable. This was an A-frame style tent incorporating a blue plastic ground sheet with three transparent plastic oblong windows, one on each side and one at the back of the tent. The door flaps were made of the same blue plastic as the ground sheet and they could be tied together by the white cotton tape affixed to each flap.

Also included, but not shown in 1975, was a blue vinyl inflatable sleeping bag with a top flap which Sindy could slide under to get in, and a white plastic kit bag with a red cotton cord drawstring handle.

The version shown above is, we think, from 1979. The only difference so far as we can see is that the earlier buggy had stick-on flower decals, but unfortunately we don't have a version of this buggy to show you.

In later years the Pedigree literature called this scenesetter 'Camper' however the boxes called it 'Camping Buggy with Foldaway Tent'. 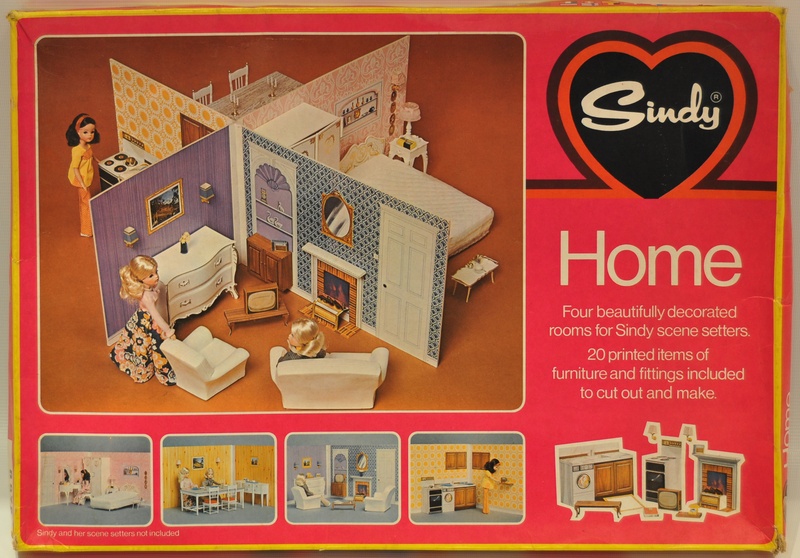 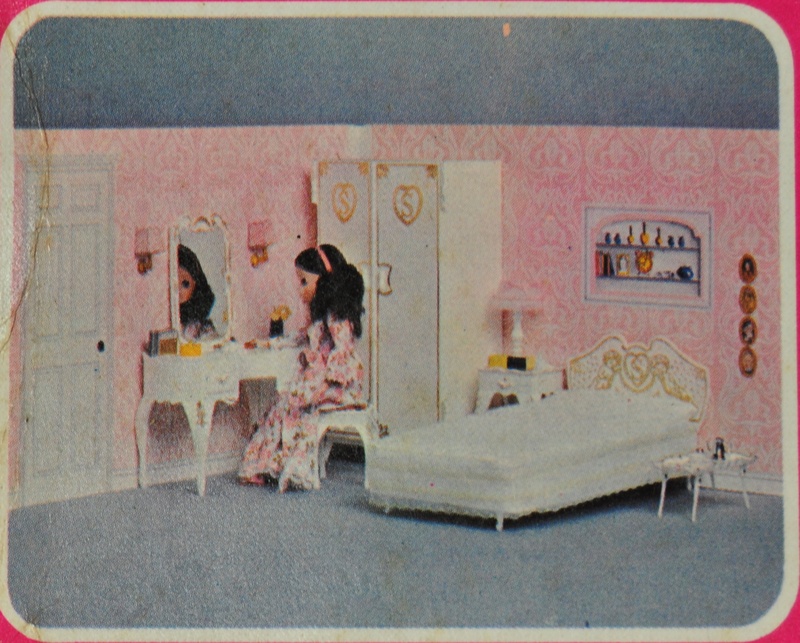 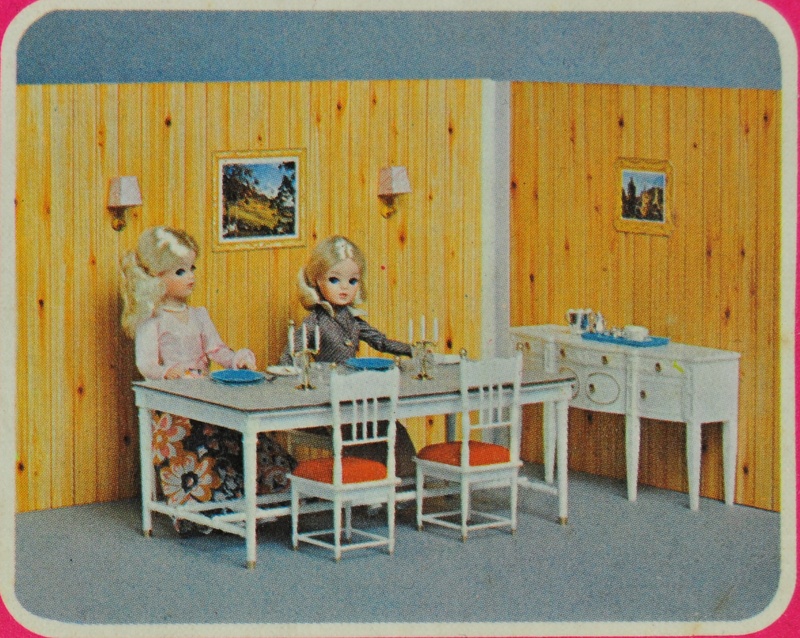 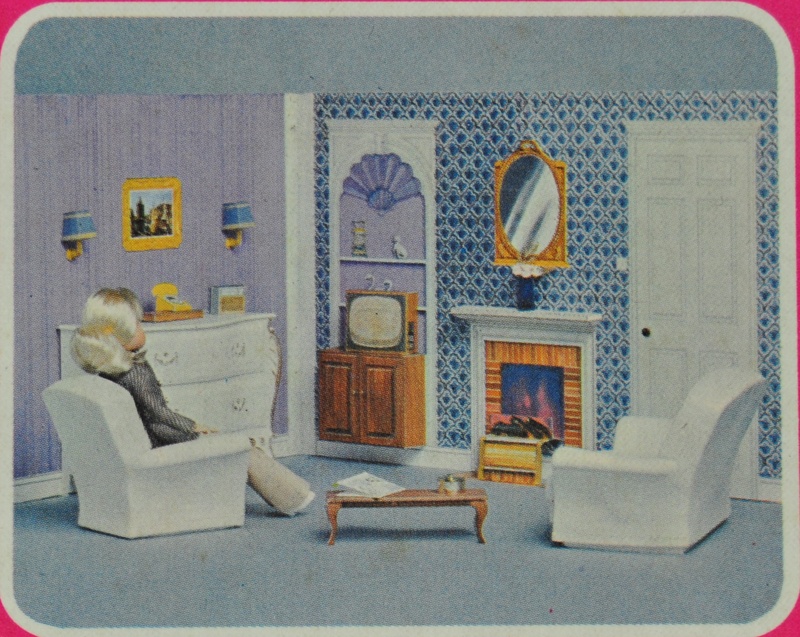 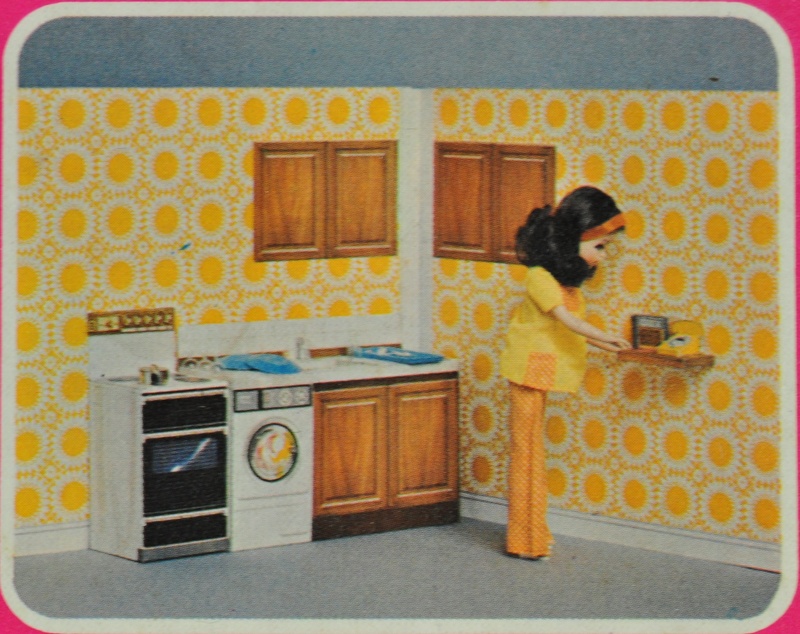 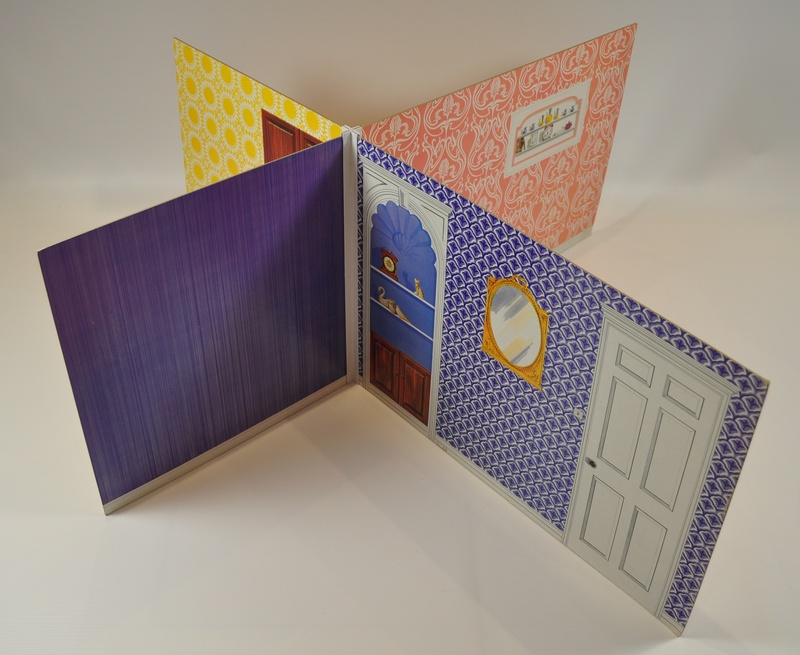 At last, a viable Sindy home which made it to the mass market and this one was simplicity itself. It consisted of four brightly decorated cardboard walls which were slotted into a central column made of white plastic. The walls are actually different widths, two were 20 inches wide and the other two were 14 inches wide. They were all 13⅞ inches in height. The different sizes meant that once assembled the home was asymmetrical in shape. The largest room was decorated as a pretty bedroom and was probably designed to be the biggest to accommodate all of Sindy's bedroom furniture. Next in size were the two rooms decorated to be the lounge and the dining room. The smallest room which was square in shape was a room that could be used as a kitchen or bathroom depending on whether you opted for your Sindy to be an eating-in or eating-out kinda girl. 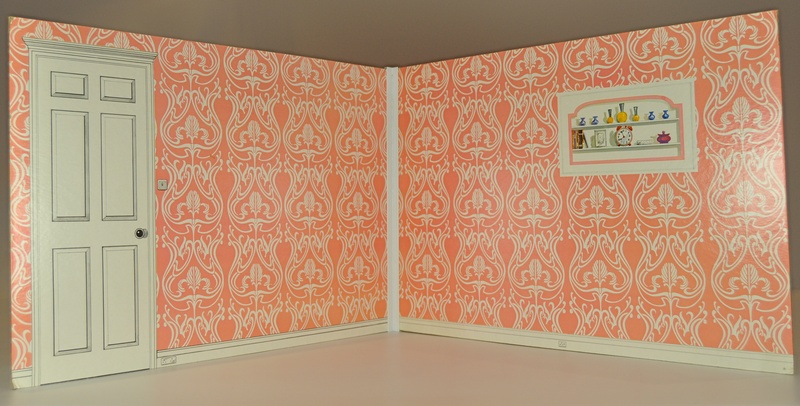 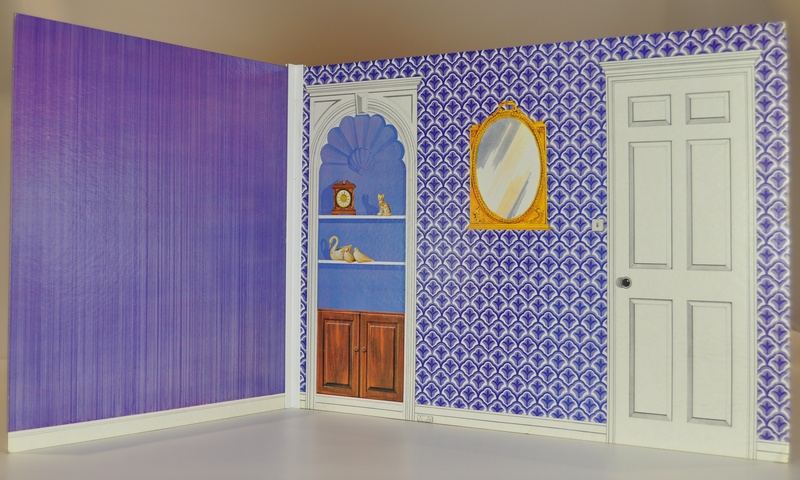 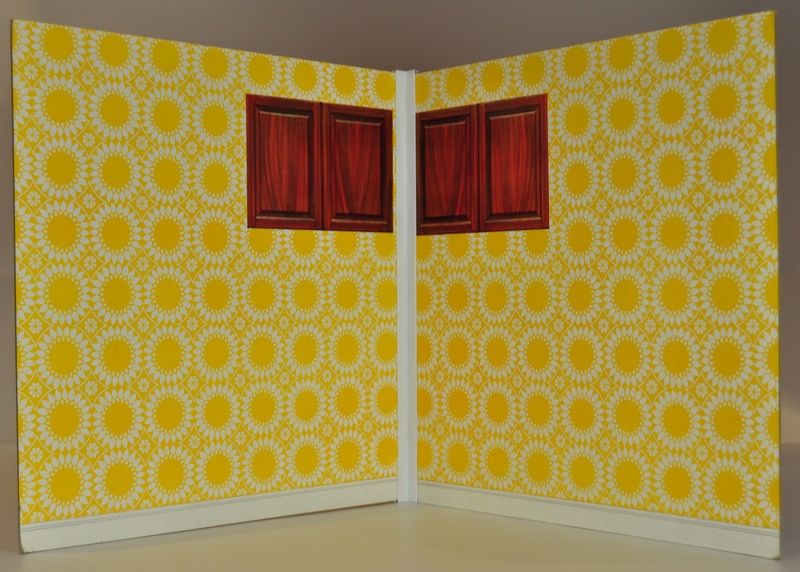 The rooms were very cleverly decorated and to a certain extent were interchangeable. There were also some nice finishing touches such as light switches, plugs and skirting boards, and the wallpaper reflected the tastes of the time including pine-cladding! 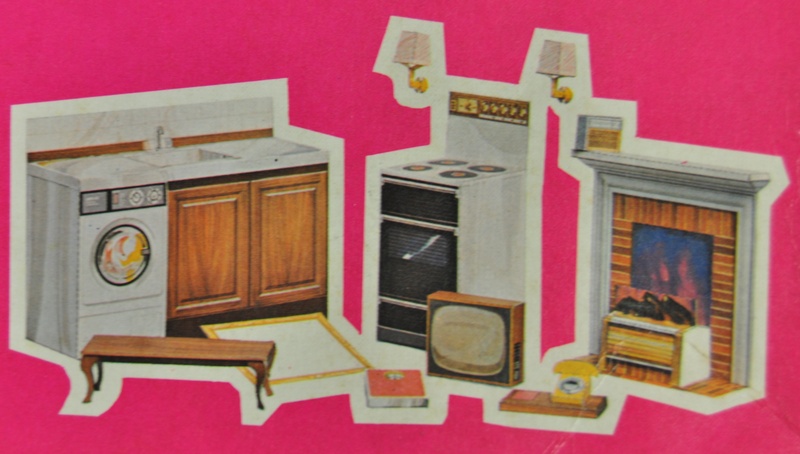 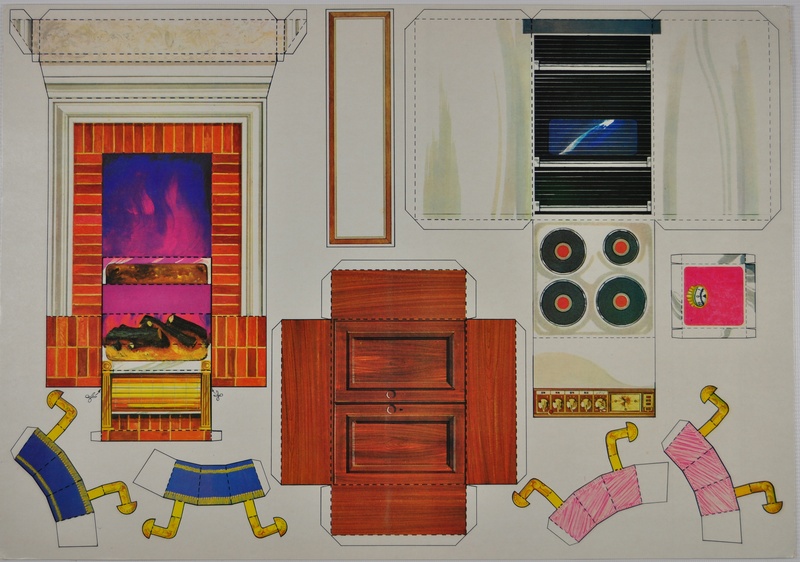 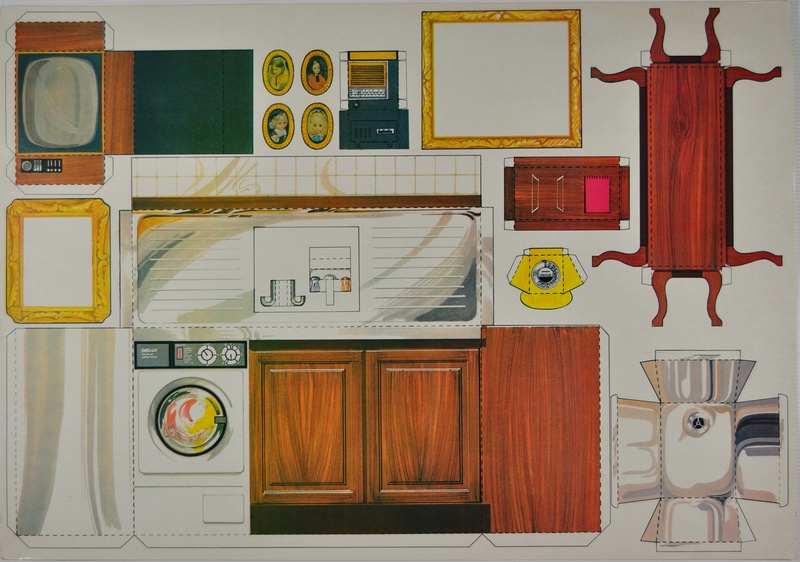 To accompany the set there were two sheets of printed cardboard which the owner could cut out to create twenty additional household items and there was an eight page instruction booklet. 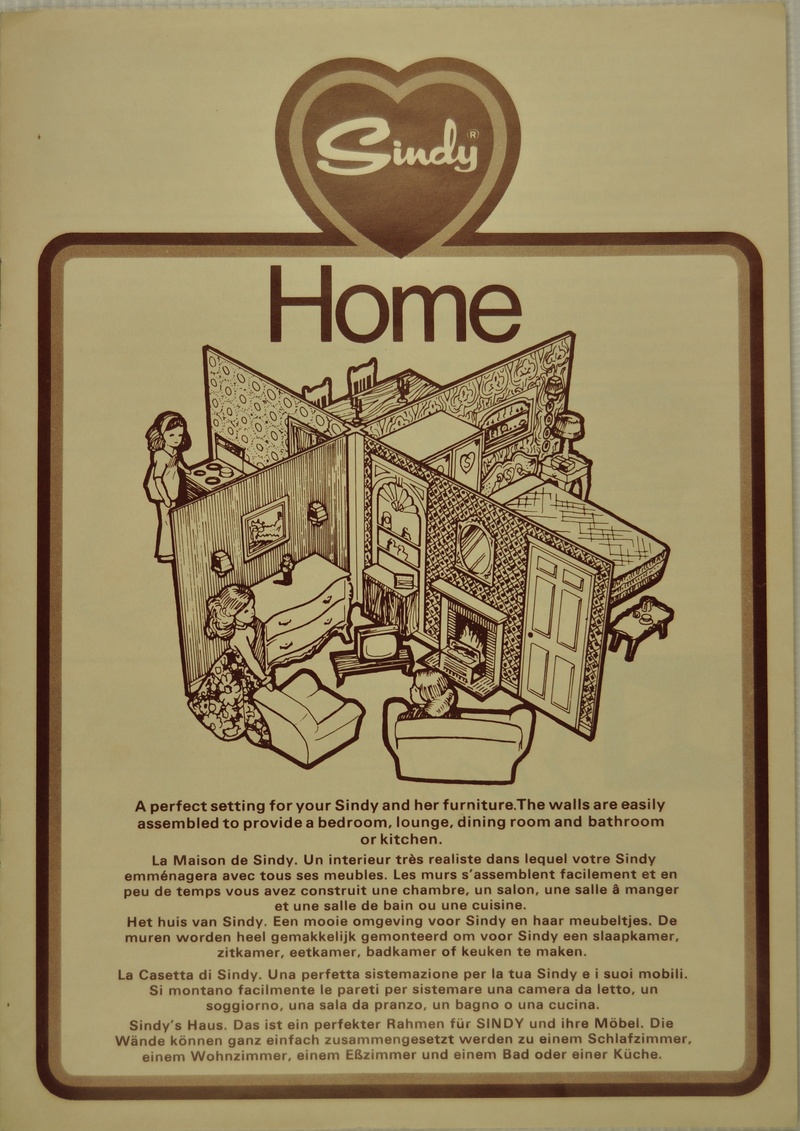 The trade catalogue says that the booklet “suggests other things to make from scrap material found around the home”, but the only thing that we could find by way of suggestions was that you could cut out pictures from any magazine to glue in the picture frames. The booklet does however include some very nice pen and ink drawings copied from the trade catalogue and style leaflet scenesetter photos showing how each room could look. 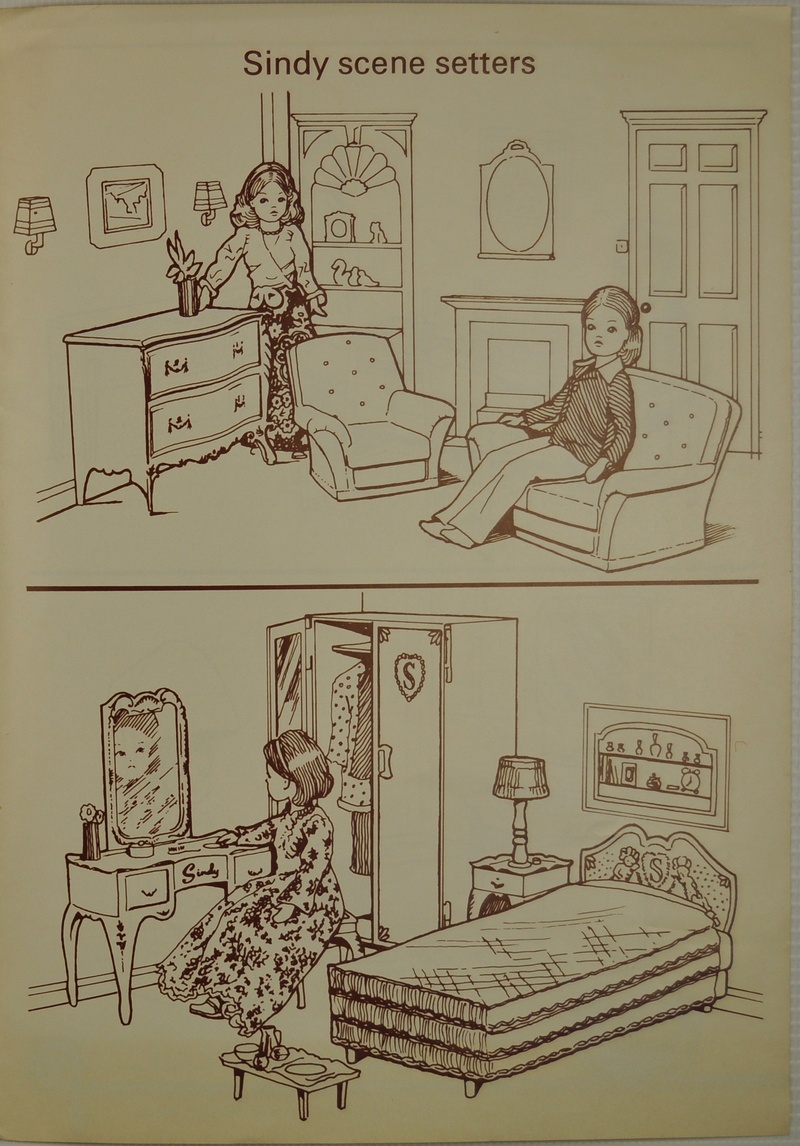 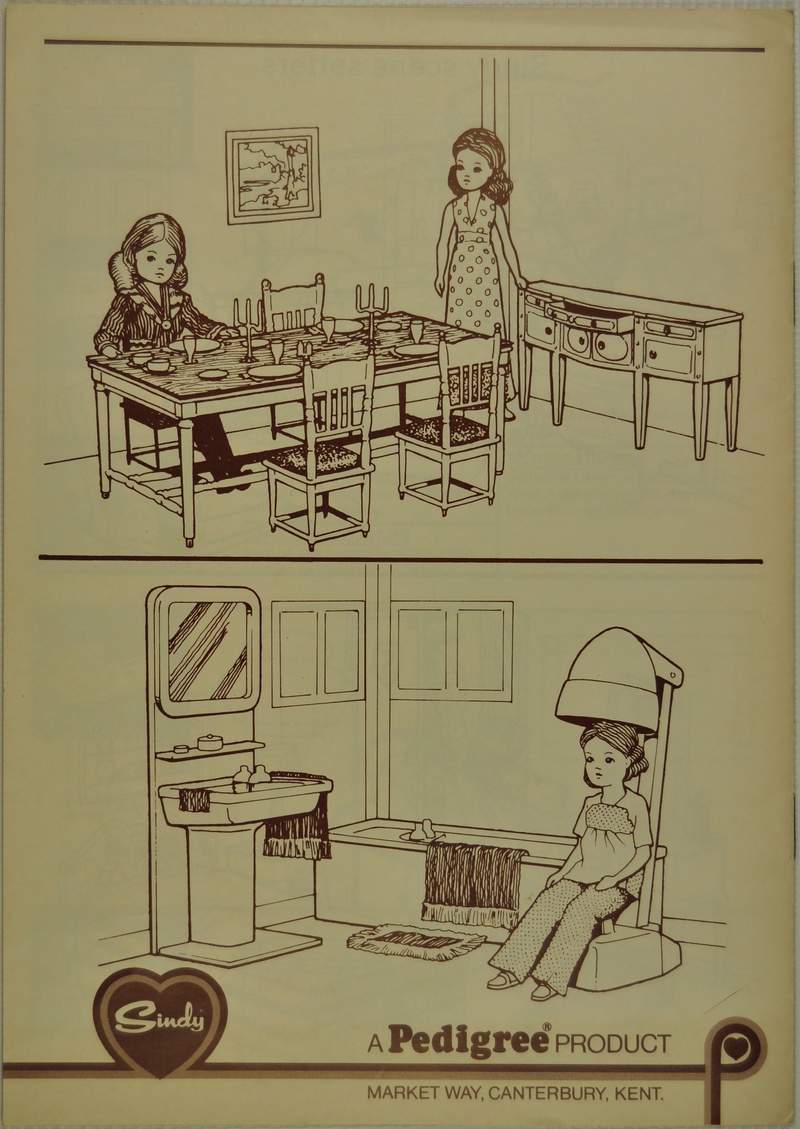