Missing from the literature was her Washday Set and working Sink Unit. So was Patch's Pony Pixie, obviously with the demise of Patch, her pony was redundant.

The Sindy's Super Show was featured although it was now called “Sindy's supershow” and was renumbered S526.

There were three releases shown for 1973. Two of them were again re-purposed Louis Marx products and came from the popular Johnny West Adventure Series, "Johnny West Ranch" (see photo below). 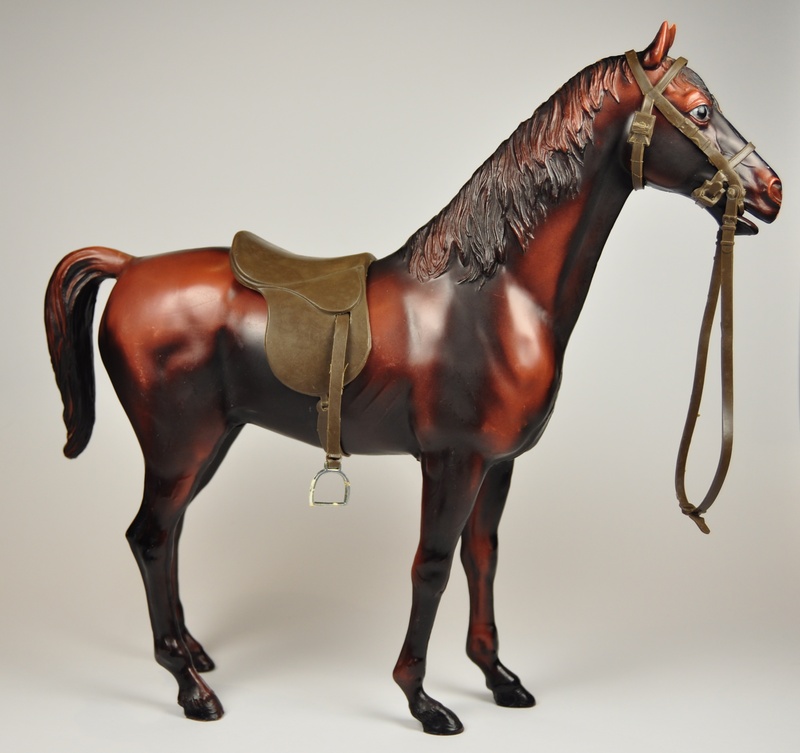 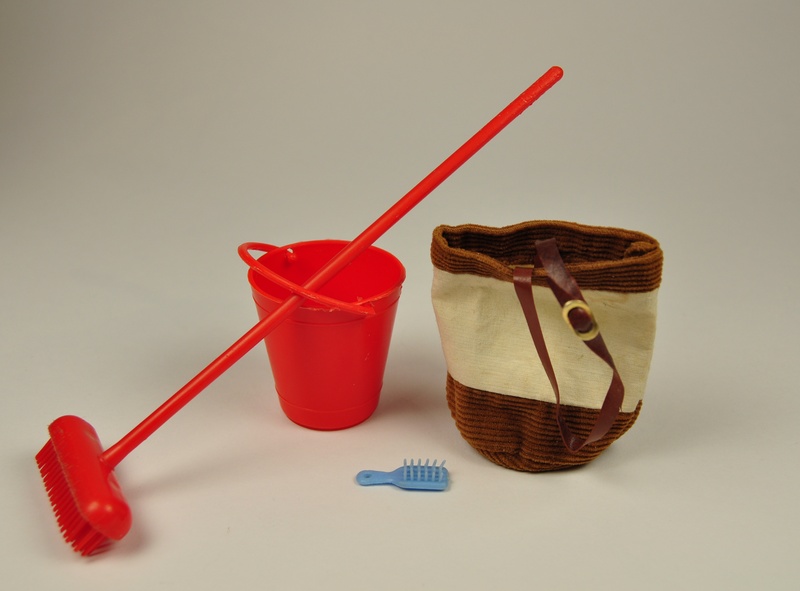 This bay coloured horse had painted eyes but it now had a moulded mane and tail. This horse was a handsome beast with a strong face, rippling muscles and it stood squarely on all four legs. The horse had a brown plastic saddle with silver plastic stirrups and a harness and bridle of brown plastic with a plastic bit. He also had cotton canvas & corduroy nosebag with a brown plastic headstrap which fastened with a gold buckle, a bucket, a yard broom and a grooming brush. We think he may have also come with curry comb (not shown) and we would be grateful if anyone could confirm whether there were any other horse accessories?

This horse was originally Johnny West's horse “Thunderbolt”, more often seen as a palomino but which was also available as a bay. As noted previously (see 1966 Scenesetters) Pedigree did have production problems with their earlier horse and perhaps access to this sturdier horse gave them the opportunity they needed to keep this popular scenesetter but to ditch the problematic earlier model. 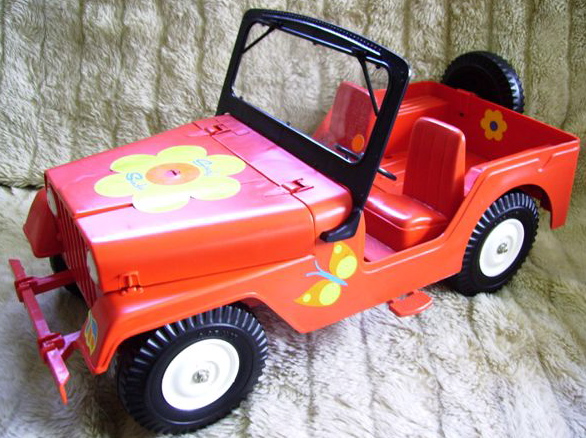 Described as “Sindy's Fun Buggy for a 'get-about' girl”, this new car for Sindy was an open top jeep in red plastic. It had a opening bonnet, four chunky tyres, white wheel hubs, a folding perspex windscreen, with a tow bar, and a spare wheel. It came with brightly coloured decal stickers to stick on the body of the buggy (which were slightly different to those shown in the trade catalogue photo).

This buggy was left-hand drive and was in fact Johnny West's jeep from his Mobile Ranch set. It was repackage and packed with a set of bright 'girlie' stickers thus turning it into Sindy's buggy.

It has been noted that the jeep looks quite military in design. This is because Johnny West himself and some his accessories evolved from a character called Sgt. Stony Smith and this jeep was actually a model of an early CJ-5, but which was moulded from bright red plastic with white tyre hubs instead of military green for the new playset.

This was a prettily decorated cardboard house which came flat packed and ready to assemble. It had a high pitched roof, four rooms decorated as a bedroom, bathroom lounge and kitchen and back flap could be lowered to create a garden. It is widely believed not to exist but one of us saw and played with this house as a little girl, as it belonged to a friend. It was made of slotted cardboard but it was flimsy. By the time it had been filled with Sindy furniture and dolls and everyone got to play with it, the floors had started to sag and the walls were no longer stable and wobbled in the slots in the roof. Unfortunately, it was quickly replaced.

We don't know if that house was a prototype and we don't know where it came from, but we are certain it was this house as the roof tiling was very distinctive (it is funny sometimes what you remember from childhood) and it was only in researching for the Sindy Museum that it was even realised that it was a Sindy house.

If anyone has anymore information on Sindy's House we would be pleased to hear from them.