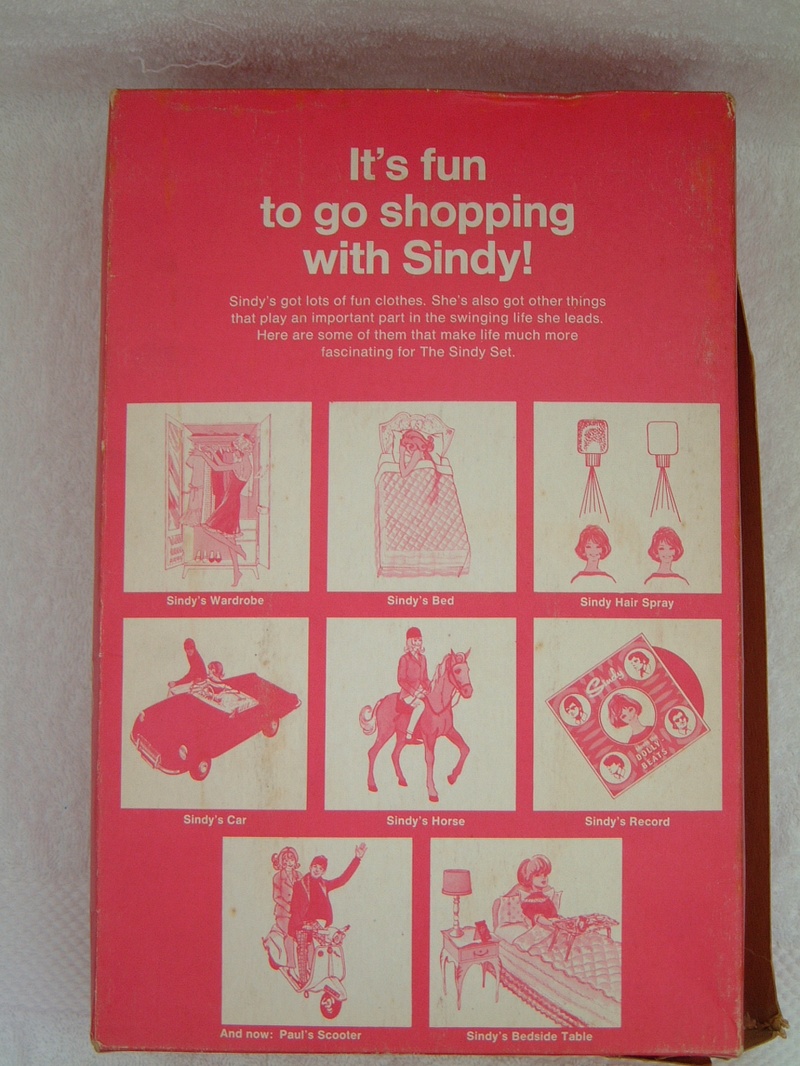 When you look at the “1967-1968 Tri-ang Bumper Book of Toys” it would appear that only two Scenesetters were released for sale in 1967 and in comparison with the 1968 Sindy Brochure, there was a wealth of brand new Scenesetters for 1968. All the old scenesetters were still available but 'Paul's Scooter' was now renamed 'Sindy's Scooter' and her 'Wardrobe' had been restyled to match her cherub 'Bed'. In addition a new bedroom furniture range was introduced as well as items which complemented Sindy's outfits. There was also a brand new scenesetter for Patch, her own pony. The boxes were finely drawn stylised pictures of the scenesetter contained within.

However the story is a little bit more complex than that. The 1967-68 Hamley's catalogue, which was released in time for 1967 Christmas ordering shows items for Sindy, Patch and Paul which span both 1967 and 1968. For example the Sindy shown is the original short-haired version, Paul (who was dropped at the end of 1967) is also shown, but surprisingly you can also see Sindy's new restyled 'Wardrobe' and 'Patch's Pony Pixie'. This is quite logical, Pedigree made toys and you need new attractive products for the Christmas spending rush. So in all likelihood, as we have seen elsewhere, some of the items that we show belonging to certain years were available earlier, probably to capture the Christmas market. The photos that we are now able to show for 1968 of Sindy's 'Dressing Table' and 'Bedside Table' have on their reverse illustrations of other Sindy scenesetters that you could pester your parents for, but they show the earlier scenesetters (see above) which points to them also being available earlier. Look at the picture of the scooter, it is not called 'Sindy's Scooter' which as we know was renamed in the 1968 Sindy Brochure, it is called 'Paul's Scooter'.

To try to avoid confusing you, we will show the Sindy item wherever possible in the year of the official Pedigree Sindy style leaflet or brochure, but please bear in mind that some of them were probably available earlier than the leaflet or brochure suggests.

Whilst the shape of the Wardrobe was fundamentally the same, with the internal mirror, shoes rack, top shelf and built-in drawers all retained, the wardrobe was now made completely in white plastic. The wardrobe doors  were restyled with a decorative gold edging with two large heart decorations on each door with an “S” in the middle. This design now matched her bed perfectly. 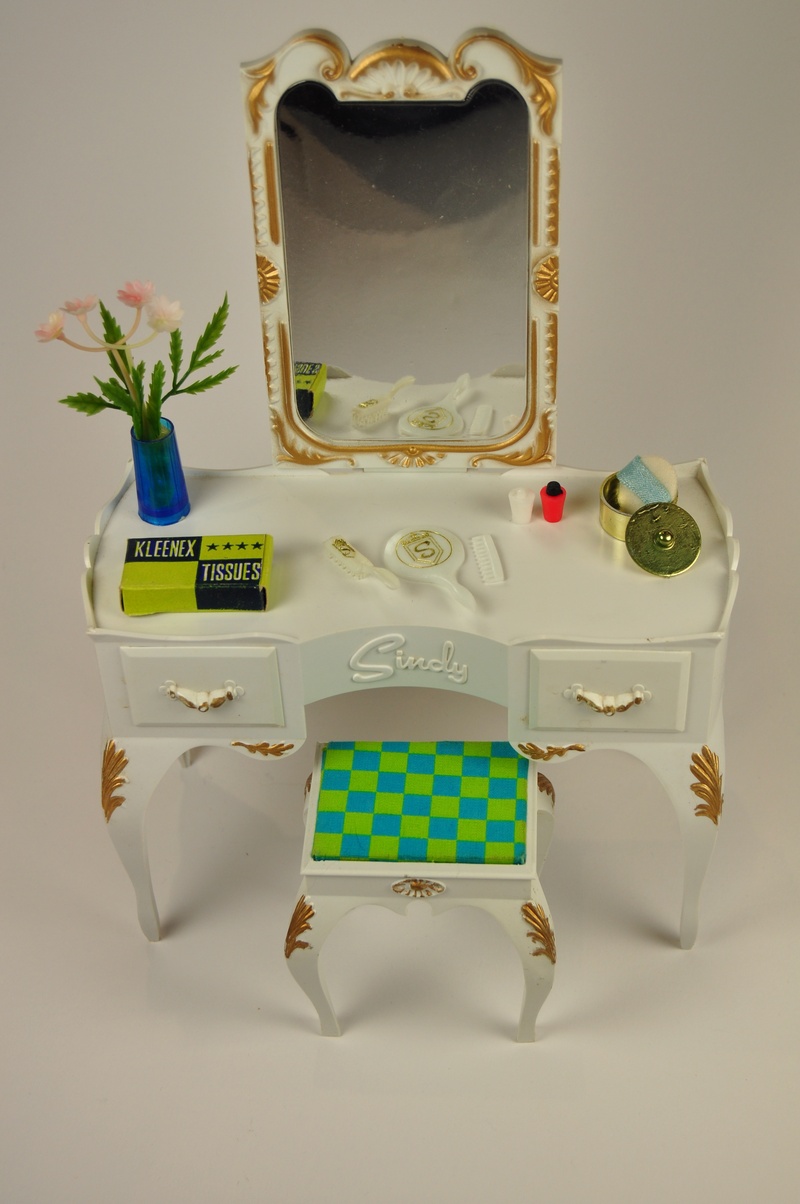 Almost rococo in style, the dressing table was the first of Sindy's newest suite of furniture for her bedroom, and very much in keeping with her cherub bed and restyled wardrobe in white with gold moulded decoration. It consisted of a two drawer dressing table with a large mirror and a stool with a fabric cover (of which there are a number of designs including moulded plastic). Sindy's name was embossed between the drawers. There was a beautiful set of accessories to help make Sindy look glamorous: a hand mirror, brush & comb in white decorated with gold, a gold powder puff box containing a real powder puff with a blue ribbon, two cosmetic bottles, a tissue box and a vase of flowers. A set of undies came with the dressing table but we do not know which ones they were - can you help? 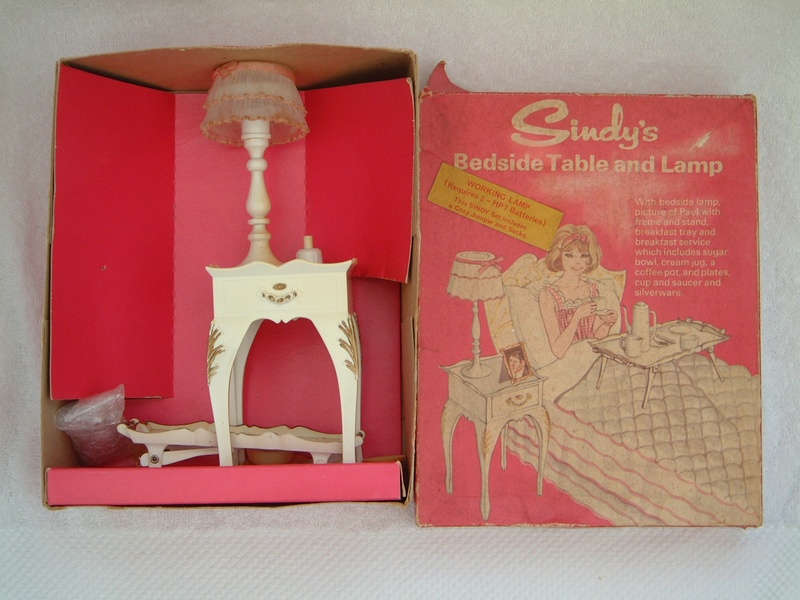 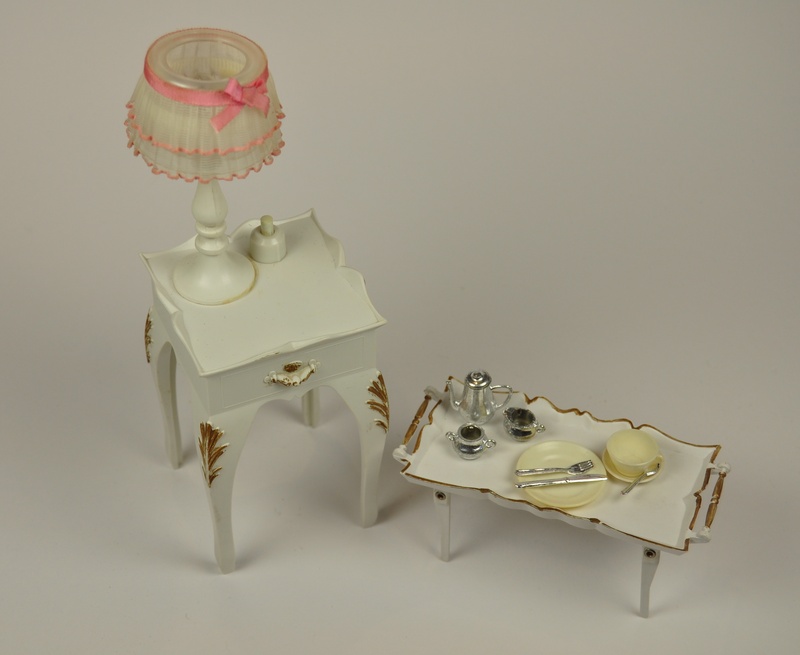 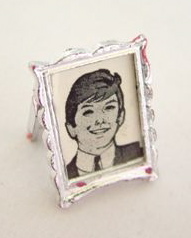 A matching bedside table with a real working light and a white breakfast tray. The bedside table had a lamp with a frilly white net lampshade edged in pink and trimmed with a pink ribbon, and there was a photo of Paul (who had been discontinued) in a silver frame. The on/off switch was normally situated on the table. The breakfast table had adjustable legs and it came complete with a small breakfast service of a coffee pot, milk jug and sugar bowl, cup, saucer, plate and cutlery. A cosy jumper was also included which we believe was the 'Sloppy Joe' sweater.

Some versions of the 1960s bedside table have a variation in the lampshade decoration and the on/off switch is placed in different positions.

A bright orange A-frame one-man tent, with a camp bed and quilted lined sleeping bag with a real zip.

The tent was made from a plastic frame of two A-frame end pieces and three plastic poles inserted into the A-frames, to give the profile of the tent. The legs on the A-frames insert into pockets in the tent fabric to pull the material tight to give it a nice defined shape. The tent itself is an orange cotton material, with a reinforced strip of the same material along the top. The opening end has 4 white cotton ties which were used to tie the tent flaps shut. The other end of the tent was sealed. It had a paper label “Made In Hong Kong”.

The camp bed was made from a rectangle of blue cotton material with the long sides folded and stitched to make long open pockets. The side poles of the bed frame could be inserted into these pockets and then the poles were then clipped onto the leg frames. It also had a paper Hong Kong label. Unfortunately our example is missing the legs.

The sleeping bag was made from quilted cotton, navy blue on the inside and sky blue on the outside. It was made of three pieces of material sewn. It had a metal zip stamped VKK. 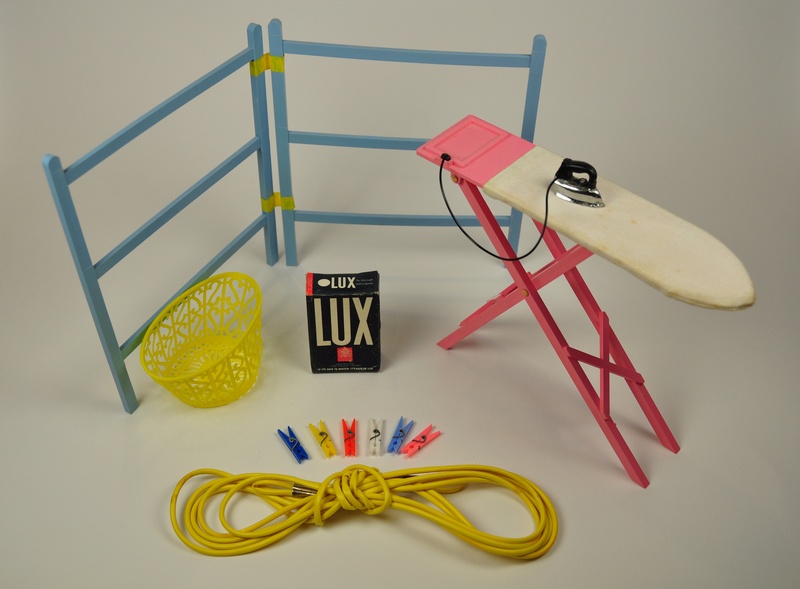 With all those clothes, it was only a matter of time before Sindy would need to do some washing and so here was her wonderfully detailed laundry set. There was an robust pink plastic ironing board with a white cotton cover, and attached to it by a black lead was a solid metal iron with a black plastic handle and temperature dial. There was also a blue plastic clothes horse, a yellow clothes basket, a yellow plastic coated washing line & six coloured pegs, and a box of Lux (our box contains real soap flakes but we cannot say whether they are original).

There was also a version which came with a bar of Lux soap rather than the soap box, as shown below in a nice MIB (Mint In Box) example. We think the ones with the soap are rarer because many of them must have been opened and used. The box illustration is particularly pretty. 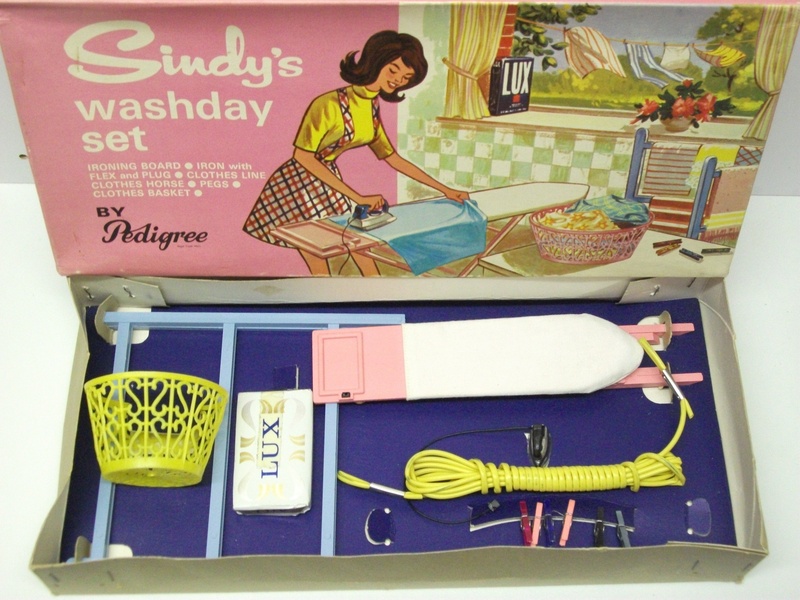 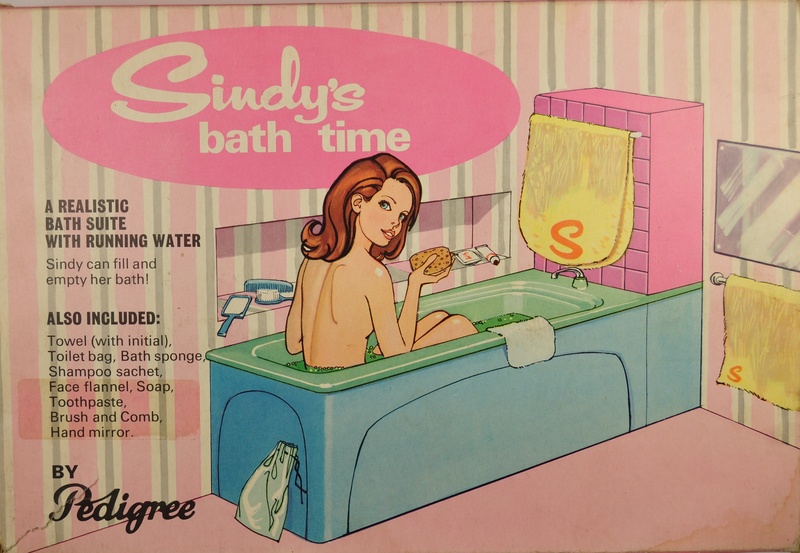 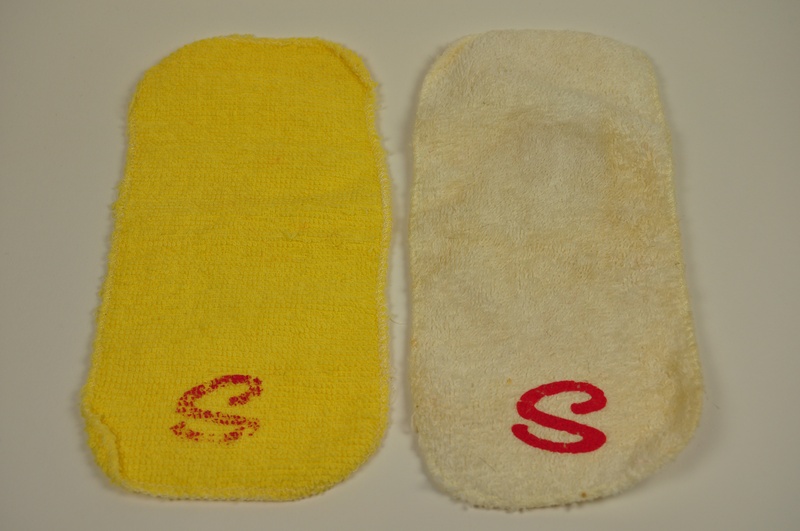 Sindy's original pink and blue bath with a real tap and plug on a chain. The bath had a blue back etched to look like tiles. It concealed a water tank which when filled would in turn fill the bath when the tap was turned on and the plug in the plughole. To drain, you removed the plug. For extra value the original packaging included an illustrated cardboard bathroom surround, with a cut-out towel rail and shelf which could be used to create a bathroom.

The style brochure for 1968 notes that there was a lovely selection of accessories to go with the bath. They listed a bath towel (shown in the illustration in yellow with a Sindy “S” printed in red), a facecloth, a wash-bag (illustrated in pastel blue, the same as in 'Sleepy Time'), brush, mirror, comb, shampoo, toothbrush, toothpaste, sponge and dressing gown (looks to be 'Cosy Nights' reused from the illustration).

However, this is Pedigree remember, and other references that we have read vary on what accessories were actually included. For example, there are two versions of the illustrated box. One version (shown here) lists:

Neither box refers to the toothbrush.

In the absence of a mint, unopened box, we cannot be certain ourselves. But we note that in some examples the yellow bath towel had been substituted for a white one (both with and without a Sindy “S”). Some do not have the toothbrush & toothpaste whilst others have all the items but they differ in colour, for example Paul's red wash-bag has been substituted for Sindy's pastel blue version, and there are both white and pink versions of the face flannel. Probably all are correct, as in order to ship the product Pedigree probably put in the box what it had to hand or what it could use instead. We now have an unplayed with example to show you, it was missing the toothpaste and soap and we have added these for show. Also shown above in the third row. First photo, the plug and tap detail. Second photo, yellow and white towels for comparison. Third photo, also from another Sindy's Bath, the sponge, a white flannel and a slightly different brush, comb and mirror set in an original drawstring plastic bag (note the different packaging, which has never been opened).

A large blue plastic wardrobe trunk, covered with bright travel stickers (which came separately in a bag for you to stick on yourself) and complete with a small  hanging rail mounted on the door, two shelves, a drawer and red hanger. There was an extra outfit for Sindy which was a variation of her 'Summery Days' dress and a pair of her white sneakers. There was also a Holiday Brochure for 1969 to help her choose her next holiday.

The matching chest of drawers for “Sindy's jumpers, blouses and skirts”, it had two large drawers  and came with a vase of flowers. In 1968, there was no reference to any extra clothes.

Patch got her first scene setter. A caramel coloured mare called Pixie. She was made of plastic with a real mane and tail which “Patch combs and sometimes plaits”. Because she was smaller that Sindy's horse she had her own saddle, stirrups and bridle.