In 1967 Paul was given a new hairstyle, some more outfits, separates and his own trendy scooter (see 1967 Scenesetters).

However this year was also Paul's last. Some say it was a failure of the Paul doll itself, that his original moulded hair and his 'real' hair model (colloquially know as 'Hairy Paul') just wasn't inspiring enough to build up a following. He was dropped when various Lines Bros. Ltd companies including Pedigree rationalised some of their production lines in anticipation of the move out of London.

Despite his demise after only three years, his outfits were wonderfully detailed, miniature replicas of the fashions of the time and they provide an interesting snapshot of what was 'hip' at the time. It would have been fascinating to see how his own fashions would have evolved throughout the 70s and 80s as we are able to do with Sindy herself.

Again rightly (or wrongly therefore) we have opted to document those outfits that were listed in ?1967-1968 Tri-ang Bumper Book of Toys? as new releases.

A dashing tennis outfit clearly designed to compliment Sindy's 1966 'Centre Court' outfit. The description points out that in this outfit he was all set for Wimbledon. Perhaps coincidentally, on 1 July 1967, Wimbledon was the first official colour broadcast that took place in the UK and four hours of live coverage of Wimbledon was shown on BBC2. So this outfit really did reflect the times. It consisted of white tennis shorts with a front-fly opening fastened with one white painted metal popper. A cotton airtex sports shirt with short sleeves and a collar and it fastened at the front of the neck with two white painted metal poppers. It was printed with a green Fred Perry logo. On top he could wear a zip-up collarless sports jacket, and he carried a tennis racquet in a press & three tennis balls in a container. On his feet he wore white nylon socks and a pair of white tennis shoes (his usual white sneakers). Designed to compliment Sindy's own 'Sail Away', Paul had his own wet weather sailing gear. His jacket and trousers were also made of the same sunshine yellow cotton-backed textured PVC as was Sindy's 'Sail Away' and Patch's 'Sou'wester'. The collared jacket had four faux flap pockets, the two breast ones were just two strips of the same material sewn all around and the side pockets were flaps. It had four toggles, which were the same as those on Sindy's 'Duffle Coat', that could be fastened together with brown thread loops. The trousers had a front-fly opening which fastened with one brass coloured metal popper. 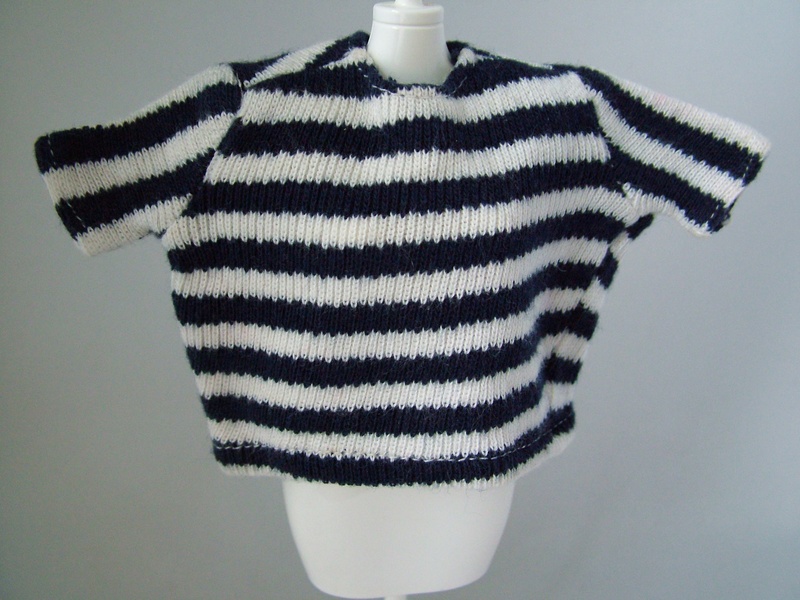 Underneath his jacket Paul wore a navy blue and white, short-sleeved matelot styled T-shirt in a knitted cotton jersey which fastened at the back with one white painted metal popper.

On his feet he wore distinctive bright blue sneakers, and he carried a pair of “powerful” binoculars. 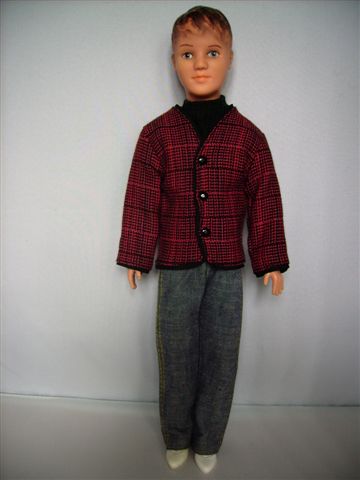 The garments are very similar but they are quite distinct items. This is also a collarless jacket, but it is made of woven cotton with a red and black tiny jacquard knit. The edges and cuffs of the cardigan are finished with black bias binding. It has a V-neckline and three black painted metal poppers. 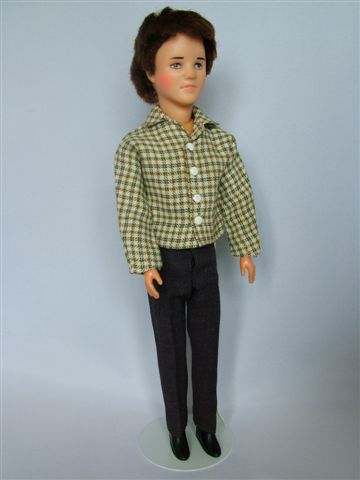 Described as an “American-styled” casual shirt, this fashionable separate was made of cotton with a green and brown countryman's check. It had long sleeves and a collar and it fastened at the front with four white painted metal poppers.

“Off for a drive with Sindy in the sports car”, here was Paul's beautifully tailored blazer made of dark navy blue wool felt. It had a collar, long sleeves and two patch pockets. It fastened at the front with three shiny brass coloured poppers. It also had a top left-hand pocket printed with gold “P” in a shield.

A pair of smart grey flannels with a front-fly fastening. We have seen some of these trousers with a black painted metal popper, and some with a brass coloured metal popper. We wonder if the brass versions were originally black and the paint has just rubbed off?